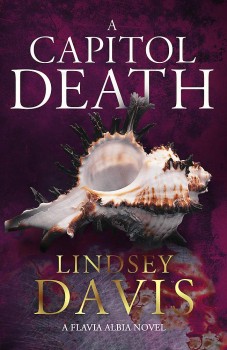 Informer Flavia Albia must discover how an unpopular overseer met a death that threatens the triumphal procession of the Emperor Domitian.

The prolific and unassailable market leader in the popular ‘crime in Ancient Rome’ sub-genre is at it again, with the seventh mystery for the inheritress of the toga of First Century detective Marcus Didius Falco – his adopted English-born daughter Flavia Albia. And she knows better than to change a winning formula.

Lindsey Davis has set more than 30 novels, beginning with Course of Honour, the love story of the Emperor Vespasian and Antonia Caenis, in this period. Twenty featured the laid-back, occasionally not scrupulously honest, Falco, his aristocratic partner Helena Justina, plus various friends, relations and pets.

Following a break for the major standalone, Master and God, Davis allowed Falco to retire to profit from his father’s decidedly dodgy antiques business and launched a new series with Falco’s adopted daughter in the lead role.

Flavia Albia is Falco in a skirt – smart, streetwise, cynical, determined and always aware of the dangers to an informer in the heaving, corrupt and violent capital of the Empire. Like her father she has a rock-solid partner in the former of the honest, but surprisingly adaptable, plebeian aedile – magistrate – Tiberius Manlius Faustis and an eclectic collection of servants, slaves, friends and animals.

In AD 89 the paranoid and vicious Emperor Domitian has returned from campaigning in the east and, despite a hardly military successful outcome, has demanded a double Triumph to celebrate his ‘victories’. The Senate has not the guts to refuse him and preparations for the massive celebration are going smoothly until one of the men overseeing transport arrangements falls to his death from a cliff on the symbolic Capitoline Hill.

It looks like an accident or suicide, but no one is prepared to face Domitian’s wrath for casting gloom over his spectacle. Frightened civil servants pass the investigation from one committee to another until it winds up with the plebeian aedile, who naturally asks his wife to look into the matter.

Flavia Albia quickly discovers the dead man, a bully and a scammer using his position for various rip-offs, was almost universally hated, and suspects there’s more to his death than meets the eye, with several people more than happy to be rid of him.

As she probes further, another death – this one clearly murder – occurs at the same spot, and Flavia Albia is drawn into a theatrical world of carnival floats, musicians, incense and sacrificial beasts, all preparing for the great event.

The plot would have been old even before Pliny began writing, but Davis brings it all to fascinating life in her squalid, sinister, vibrant, gloriously and sometimes horrifyingly, realistic ancient Rome. As always, her story positively sparkles with historical knowledge and its galloping narrative is carried along by pointed and cynical wit.

Davis is the absolute mistress of making the reader feel entirely immersed in her tale. For the aficionados, this is another absolute winner. For those who haven’t met the familia Falco before, Flavia Albia is prettier than Poirot and smarter than Sherlock! If you don’t tread in her elegantly sandalled steps, you’ve missed a genuine detective treat.