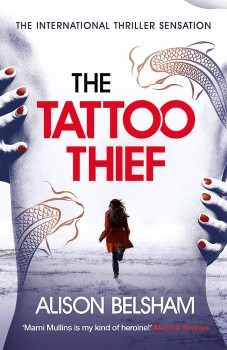 Marni Mullins’ s coffee break during the Brighton tattoo convention turns into a horror story when she finds a mutilated body in the bin.

Single mum Marni Mullins is a respected tattoo artist with a dark past. When she finds a disfigured corpse dumped in the rubbish, the last thing she wants to do is get involved. But her conscience pricks, and she leaves an anonymous message for the police.
Francis Sullivan is the newest DI on the Sussex force. He is also the youngest, and his promotion has ruffled more than one set of feathers. He’s not due to take up the reins until the following day, but Marni’s discovery puts him on the backfoot with this, his first murder case, right from the start.
DS Rory Mackay is quietly seething. Sullivan has got the promotion he should have had, and he knows the kid will mess up – because he will make sure he does to secure the promotion he should have had.
The only thing the three have in common is they want the killer found. A killer who loves flaying skin, and who is about to strike again.
The Tattoo Thief is a police procedural with a slight twist, in that a sizable percentage of the chapters are from Marni’s point of view. There are also regular chapters from the killer’s view. These latter chapters are in the first-person present tense, the others in the third person past tense.
Alison Belsham has developed the main characters and tried to give each one a twist to de-stereotype them: Marni is a conflicted person, she still has feelings for her ex-husband, Thierry, she is a tattoo artist with intelligent things to say. But she changes her mind too quickly and acts out of character too often to be believable.
Sullivan has interesting baggage (his sister and mother have MS and his father has done a bunk), he is concerned that his promotion has come too fast, too soon, he is woman-naïve and religious. He blushes regularly when women confront him (too regularly for a man who has grown up with women), and his religious side falls apart somewhat as he is the character who swears the most. His insecurity is also at odds with how easily he confronts his superior.
Mackay’s underhand behaviour is so inconsistent and overdone – he is a parody of the jealous undervalued cop. As for the killer and the killer’s boss, there are so many clues and so much clunking foreshadowing that any twists in the tale are obvious within the first handful of chapters. Great antagonists and worthy killers should be more than cardboard bad guys – think Hannibal Lecter. The reader should have an empathy with them or their raison d’être, even if their acts and behaviour are heinous. Unfortunately, the Tattoo Thief’s point of view feels more like an opportunity to expose as much gore as possible. Other than that, and the twist that isn’t, the killer is utterly stereotyped, and I felt no empathy whatsoever.
The writing style disturbed me. Often the word choice is inappropriate and rather pretentious for a police procedural. It is Latinate, thesaurus-based, with much repetition through the explanation of actions in dialogue and vice-versa. The dialogue is generic and sometimes longwinded, as are descriptions and the action.
For devotees of police procedurals or mysteries, there are no surprises in The Tattoo Thief. That said, there is a reasonable balance between introspection, action and dialogue, and if one can swallow the exuberant attention to detail in the gore paragraphs, this is an easy, fast read.