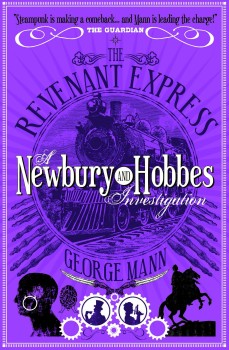 Investigators Newbury and Hobbes return with a mystery involving sinister experiments and a dangerous train journey across Europe.

Sir Maurice Newbury and Veronica Hobbes are a pair of private investigators and secret agents for the corrupt monarch, Queen Victoria. The setting for all the books is an alternate world that blends steampunk and occult elements to create a fascinating fictional universe, rich in vivid details.

The book opens with Veronica investigating the strange case of a man who has died after being infected with some kind of monstrous fungus. She works alongside Sir Charles Bainbridge (a recurring character throughout the books, who is a senior police officer with Scotland Yard), and their search leads them through the slums of London to an abandoned hospital whose horrific contents may provide the lead they are searching for.

Meanwhile, Newbury has embarked on a train journey across Europe to St Petersburg on a crucial mission to obtain the replacement mechanical heart Veronica needs after the events of the last book. He is accompanied by Amelia, Veronica's sister. But as the train speeds across Europe, they discover it is hiding a deadly secret and things are further complicated by an assassin sent by The Cabal (a sinister cult) who are pursuing Newbury for stealing a book from them.

The plot is quite straightforward with no big twists, but Mann keeps things interesting with some vividly described action scenes. Although it does seem a shame to separate Newbury and Hobbes, it allows their relationships with other characters such as Sir Charles Bainbridge to be highlighted. The ending feels a bit rushed and I felt like several questions from this plotline were left unanswered. However, the last few pages potentially set things up for a new adventure and one that could be their most dangerous yet.

The book also includes a short story called The Word of Menamhotep where Newbury and Hobbes are called upon to solve a series of mysterious deaths of academics studying an obscure ancient Egyptian deity. It felt like this story had a lot more potential and could have done with being expanded, as it felt rather rushed in places. But overall, it was an intriguing extra to add to the main book.

Jane Appleby lives in the North East of England where she works as a civil servant.