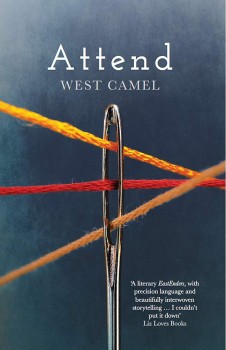 Sam, a young gay man, and Anne, a recovering heroin addict, are connected through the world of drugs and revenge in Deptford. They must deal with the consequences of other people’s deeds that affect their own existence.

Sam, in his early 20s, finally escapes a boring life with his parents and unsuccessful online chases after men and moves to a big city where he finds an equally tedious job and an unwelcoming bedsit. He also encounters Derek, an exciting new lover, who’s the local thug dealing with some huge personal challenges. Sam falls hopelessly in love and lust but realises that the budding fragile relationship also makes him scared and insecure.
Anne, a 45-year-old recovering heroin addict, feels in delicate control for the very first time, after securing own place to live and staying off drugs for the last 18 months. She tries to repair broken ties with her adult daughter Julie and mother Rita, and as she attends the christening of her grandson Tom, she even feels tiny bit of hope for the future. Unfortunately, her best friend and cancer sufferer Kathleen commits suicide, and Anne’s ex-husband Mel blames her for giving in to Kathleen’s demands to get drugs. Anne had been to help her take own life but had managed to refuse.
Without realising it, Sam and Anne are linked not only through the world of drugs and violence in a fairly small well-established Deptford community where honour, reputation and revenge are on a daily menu. They also share the friendship of a mysterious self-proclaimed immortal Deborah. The enigmatic seamstress has a flair for telling the most incredible stories and for stitching a stunning intricate motif which apparently has protected her from dying during both world wars and keeps her alive despite old age. Deborah says that she cannot die and as she weaves her tales of discovery of strange tapestries in a tunnel underneath her house by the creek, Sam and Anne aren’t sure whether to believe in what they hear.
However, they decide to work together when they accidentally meet in Rita’s house following the arrest of Derek and Mel, accused of burglary, but suspected by some of killing Nigel, a man who might have supplied deadly drugs to Kathleen. Together they want to save those who can be saved.
The modern-day setting of Deptford, east London, provides a platform for three intertwined strands exploring feelings of loneliness and sense of belonging, or rather wanting to belong, and to be a part of a group. Brought together from isolation the three main life stories make a powerful mix, exploring identity, truth and guilt.
West Camel’s debut Attend might not be labelled as a classic crime novel with consequences of gritty factual reality at its core. The book also brings magical realism, fantasy and elements of historical fiction as Deborah takes us back to her own past and that of the area.
The author focuses on a poetic look at people’s existence. Lyrical and intense, the spellbinding prose is full of carefully chosen words which create an emotive and flowing narration. The description of the main characters is flawless, giving them individual strong places in the game of connections. West Camel confidently creates the atmosphere of sadness and melancholy, mixing forgotten or unknown history of a very realistic location with complex, individual difficulties.
I found it easy to identify with some of very eloquently presented emotions, and I would recommend the novel for those who want darkness and mystery, and some unforgettable characters, all presented in a charming and ingenious manner.