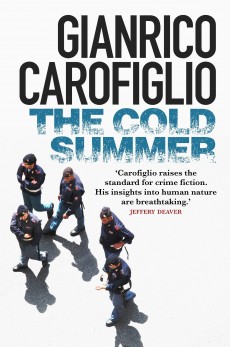 Pietro Fenoglio, a Marshall in the Carabinieri, conducts an investigation into the kidnapping and killing of a local mobster’s young son amidst spreading violence in the region.

The Cold Summer follows events that happened in the summer of 1992 in southern Italy. The season was recognised as one of the oldest and rainiest summers, but in this context the title refers also to dramatic and chilling circumstances surrounding the spread of Mafia violence.

The criminal underworld has always been associated with Sicily and has kept spreading to reach the region of Puglia where the novel is set. The brutality of various actions, the resourcefulness of people belonging to or being affiliated with organised groups, organisations and families, and the never-ending battle between the criminals and those on the side of law have never been more intense.

The book is inspired by a true story and features Marshall Pietro Fenoglio, a local officer of the Carabinieri. Fenoglio, an educated thoughtful and intelligent man whose original intention wasn’t to be in the police, battles with feelings of personal inadequacy after his wife has recently moved out. He’s respected and not very likeable but aware of this.

As the violence escalates, he’s faced with a case of a kidnapping and the killing of a ten-year-old boy, the son of a vicious mobster Nicola Grimaldi. Of course Grimaldi’s family has quickly paid the ransom money but would not collaborate with the police to search for the killers and suspects that rival Vito Lopez, aka the Butcher, is the culprit, responsible for the boy’s death. The only course of action for the mobsters would be full-on retaliation.
Lopez becomes aware that his earlier gang warfare against Grimaldi makes him an easy target and hence decides to cooperate with the police to confess ‘lesser’ crimes and ask for protection. His past is shocking and at the same time so typical and ordinary compared to all the other men who lead similar life. They all got involved in crime in order to survive, or are driven by greed, fear or power games.

Gianrico Carofiglio worked for many years as a prosecutor specialising in organised crime and his vast experience as an anti-Mafia advisor shines throughout the novel’s pages. Without doubt, one of the most interesting aspects of the book is the moral ambiguity so obvious in the world of constant fighting within the entire system. The author presents all arguments clearly and with confidence, without being judgmental. Difficulty distinguishing between the investigators and the investigated is always present, and no one remains immune from making dubious choices that would not stand up in the court of law. Fenoglio’s position in the centre of the investigation and as a philosophical beacon adds sharp authenticity.

Carofiglio’s style is elegant, calm and precise yet extremely hard-hitting. He presents facts, provides transcripts of the interrogation explaining inner workings and the hierarchy within the Mafia, and analyses Fenoglio’s feelings. The marshall finds himself wondering whether Lopez could be ‘a civilised murderer’ and then reminds himself that there is no black and white, only grey areas.
I was impressed by this methodical book, translated by Howard Curtis, and am very tempted to read Carofiglio’s Guido Guerrieri crime series.