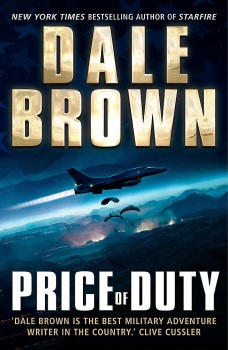 Renegade military contractor Scion, led by a former US president, set out to defeat a plan by Russian president Gennadiy Gryzlov to destabilise and reclaim former Soviet satellites through a wave of cyberattacks.

If Donald Trump read books instead of indulging in outpourings of off-the-cuff, misspelt Tweets, he would be the biggest fan of Dale Brown’s long-running Skymaster military techno-thriller series.

Former US Air Force captain Brown, a navigator who logged thousands of hours on long-range B-52 bombers and the supersonic FB-111 Aardvark medium-range interdictor and tactical attack aircraft, presents a picture of exactly what Trump would want America to be.

In this 21st story, the patriotic McLanahan family and the fiercely independent military contractor Scion, run by former President Martindale, again defend America against itself in the form of a weak, isolationist, woman president who has already failed to prevent the break-up of NATO, and in the face of new provocations from a resurgent and expansionist Russia.

It’s all so simplistic. Gennadiy Gryzlov – so obviously a not overly-exaggerated portrayal of ‘Bad Vlad’ Putin who is determined to restore Russia to its Soviet glories –  opens his campaign with a series of cyber warfare attacks designed to undermine the former Warsaw Pact countries abandoned by NATO who have now formed themselves into the Polish-led Alliance of Free Nations.

From a secret location deep in the Ural Mountains – where have we heard that line before? – Russian hackers use malware to destroy almost the whole of Poland’s banking records, then escalate the attacks to include power sources, water supplies and the remote hijacking of a Chinese airliner that kills hundreds of civilians.

All that said, Brown, possibly the godfather of the techno-thriller genre, again produces some creative story ideas. With so much of the background based in fact and public knowledge, it doesn’t take too much exaggeration to produce a well-choreographed story leading up to a climactic, if improbable, ending.

This tense, atmospheric thriller moves at breakneck pace. It’s highly readable, and its twists and turns will keep you glued to the page. It’s a non-stop powerhouse of action on top of action, fascinating and intricate details on military technology and tactics and with a forward-thinking but conceivable geopolitical plot.

But despite Brown’s evident knowledge of aircraft, weapons and military strategy, not much in the storyline is original and there is precious little development of the leading characters. It’s all too stereotyped, too predictable. Even the introduction of human ‘piloted’ War of the World- style combat robots, doubtless currently being researched by the US military and their contractors, fails to lift this story.