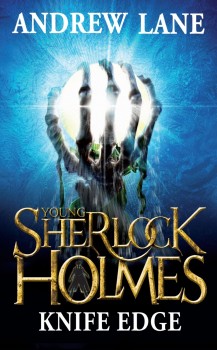 Sherlock has nearly found his way back to England after his adventures in the Far East, but before he gets home, he has to stop over a little longer that he intended in Ireland to help his brother Mycroft investigate the strange case of a man who claims he can talk to the dead.

I’m not even going to begin to catalogue the number of authors who’ve taken on the character of Sherlock Homes. The creator of probably the best known fictional detective ever took a relaxed view of what is now known as fanfiction, even in his life time, and so almost certainly wouldn’t have turned a hair at any re-imaginings of Holmes. Although the character is now out of copyright in the UK, Andrew Lane’s young Sherlock books come complete with the seal of approval from Arthur Conan Doyle’s estate.

Lane is a lifelong Holmes fan and it shows. Young Sherlock is very much worthy of the original and if Knife Edge is anything to go by, the series as a whole is cleverly conceived and well-executed. In this, the sixth of his adventures, Sherlock has landed on the west coast of Ireland on his way back to the UK after being kidnapped and whisked off to the Orient, leaving behind a girl he thinks he might have loved, who later jilted him – not wholly unreasonably – for someone else. So it’s a somewhat bittersweet return for our young hero, leavened only by the surprise meeting on the quay on Galway town with his elder brother, Mycroft.

Mycroft refutes claims that fraternal duty led him to welcome his brother almost home, but then he promptly enlists Sherlock’s help in solving the mystery of a man who claims to be able to contact the dead. An auction is being held for his services between the representatives of various governments, taking place in the impressive setting of Cloon Ard Castle on the coast, haunted by a frightening folktale of a strange, dark beast. But before the bidding commences, Ambrose Albano has to convince the potential bidders that his claims are true.

When Mycroft is attacked and injured, it’s up to Sherlock to delve into the world of spiritualism to see whether Albano is a fake or the genuine article. Sherlock is far more sceptical on the subject than his original creator, but he has to delve deep to solve the various mysteries surrounding Cloon Ard Castle and its motley inhabitants.

Sherlock’s love interest with both the daughter of the castle’s owner and Virginia, the daughter of Sherlock’s teacher and friend, Amyus Crowe, never becomes to intrusive, but in both cases manages to be poignant and realistic, and provide a foreshadowing of the man we know Holmes will grow into.

I’ve come late to this series, as I do with a lot, and this tale was sufficiently well-told for me to want to go back through the others now, not least of which because I’d like to know more about Sherlock’s friends, Matty and Rufus Stone. Lane has an easy way with characters, and even the ones almost incidental to his story clearly have a life of their own. This is a stylish and entertaining version of Sherlock that can be happily placed beside the originals in the library of any fan.