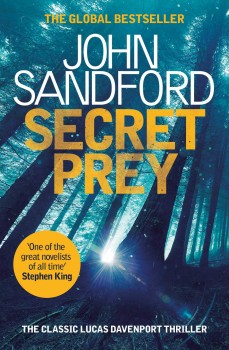 Deputy Chief Lucas Davenport is called in when a banker is shot during a hunting trip, an event that proves to be just the beginning of a series of attacks.

Chairman and CEO of the Polaris Bank Daniel Krege leads four of his top executives out for the traditional deer hunt on the opening day of the season, but in the dawn light he is shot from his stand. The local sheriff calls in the murder specialists from Minnesota, with Lucas Davenport in a lead role.

Krege was in the process of selling Polaris in a merger which would have made him a fortune but left many others displaced. Those with the most to lose were his hunting companions, three of whom immediately start manoeuvres to occupy the now vacant CEO post.

As in other Davenport thrillers we see as much of his foes as we do of the detective himself, but Secret Prey is somewhat unusual in that the action encompasses the potential villains, and the true killer is only identified more than halfway through the book. By this time there have been several other incidents which make it clear that there is a very dangerous person at work.

Davenport starts the book on the brink of depression: his relationship with Weather is derailed by an incident described in his last outing, but getting his teeth into a case helps him to throw that off, especially when his prey attempts to distract him by attacks on his nearest and dearest. A red-hot affair with another cop, Marcy Sherrill, doesn’t hurt either.

This is one of what I take to be selective re-issue of some of the early Davenport oeuvre, now around 30 in number. As a fan I have to say they are all good, but this is one of the best and if you haven’t yet tried one, would be a good choice.

The book has all the elements which make the series so appealing. First there is the action, with enough shootings, assaults, manic car rides, sex, diabolical murders and general mayhem to sustain an elevated pulse rate throughout the book. Secondly there is the repartee, particularly between Davenport and his colleagues, but generally the dialogue sparkles and is a joy to read, with a laugh or at least a grin to be had on every page.

John Sandford (real name John Camp) spent many years as a newspaper journalist and his experience roots the stories sufficiently well in how policing and politics work that it is easy to believe that they are not too far from reality. Unfortunately, that is not the case: real people are less intelligent, police work less efficient and life generally just not that exciting. But on the positive side there are fewer of the truly twisted yet terribly cunning bad guys that Sandford conjures up, people who you would definitely not want to meet.