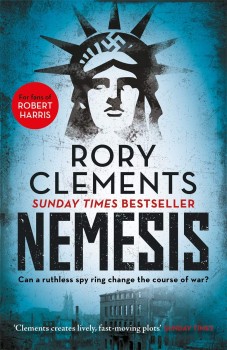 Professor Tom Wilde of Cambridge University is in France on holiday when he is approached by a man who appears to be a beggar. He tells Wilde that one of his former students, who joined the International Brigade in the Spanish Civil War, is now held in a French prison camp and urges Wilde to do all he can to free him.

The year is 1931. Colonel Robert Marfield is sitting with his wife and elder son in the chapel of King's College, Cambridge. His younger son, 13-year-old Marcus, is part of the choir, but none of the other choristers can begin to match the quality of his voice. It is noticeable, however, that his wife is totally unimpressed – something he finds difficult to understand.

The action moves forward eight years and we are in the last days of peace and the first of World War II. It is impossible to understand the events of this novel without some knowledge of the political issues of these days, the first of which was whether the United States would join the war on the side of the Allies or whether it would act according to its own isolationist instincts and remain neutral.

On holiday in France, Professor Tom Wilde, a Cambridge don, is approached by a man who informs him that one of his former students is being held prisoner by the French in a camp near the Pyrenees. It turns out to be none other than Marcus Marfield, the choral scholar whom we saw in King's Chapel and whose supervisor Wilde had been. Apparently, Marcus had left Cambridge in 1937 to join the International Brigade in the Spanish Civil War.

The man, who calls himself Honoré, tells Wilde where to find Marcus and implores him to do all he can to organizs his repatriation to England. Apparently, he has been wounded and is ill. This Wilde manages to do and is also able to arrange for him to be accommodated in college rooms. However, Marcus appears less than grateful for what has been done on his behalf and is very uncommunicative. Wilde begins to wonder just who Marcus Marfield really is. His wonder turns to complete bewilderment when, immediately upon Marcus's return to England, his father commits suicide.

It becomes clear very early on that this is one of those espionage novels where virtually nobody can be trusted. There is a young woman having an affair with the US ambassador to Britain, Joseph Kennedy, but it is obvious that the affair is simply a means to an end.  There is another woman who clearly means Marcus no good. There is a young American, newly arrived at the British Embassy, who has previously been in Moscow.

These and many other unexplained events keep us guessing during the first half of the book. Wilde seems unable to separate himself from events that appear to be related to the young man he had brought home from France. It is perhaps fortunate that Wilde's particular study has been Tudor – and particularly Elizabethan – history. Knowledge of spying on Protestants during the reign of Bloody Mary and of Catholics under Elizabeth appears to have equipped him with an instinct for knowing when he is not being told the truth and that, together with a very quick mind, enables him, piece by piece, to put the puzzle together.

The way in which he goes about it, whilst being entirely logical, provides the reader with one surprise after another. Perhaps there is an excess of being taken captive, escaping and being taken captive again but even that is entirely believable in the circumstances described. Certainly, the closing chapters of the book are intensely exciting and it is this excitement that makes the book a thriller, but the first half is very much a story – and a gripping one – of espionage. The first days of the war provided an excuse for deception by all the parties involved and the author convinces us that this particular story could well have been part of that.