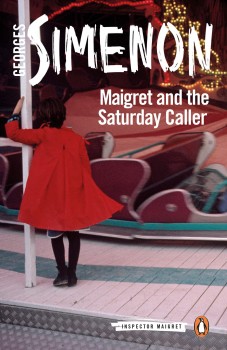 Maigret and the Saturday Caller

Maigret is walking to the bus stop after work one Saturday evening when he notices a man apparently following him. When he arrives home his wife tells him that someone is waiting to see him. It is the same man.

Maigret leaves the office at about 6.30pm on a cold, foggy autumn evening. It is Saturday and for once he is getting away relatively early. As he makes his way to the bus stop he has the impression that a man is following him. When he turns his head a man in dark clothing has suddenly seemed to do an about-turn. He dismisses it from his mind as of no importance, but when he arrives home his wife tells him that a man is waiting to see him.

The man has a hare lip and Maigret recognises him as someone who has called to see him at his office on a number of occasions but has always left without doing so. He even remembers his name – Planchon.

He apologises profusely for having disturbed Maigret when he was just about to eat. He says he has written a number of letters to Maigret but has always torn them up, feeling that he needed to speak face to face. He has, however, always lacked the courage to do so when he had the opportunity. Still apologising, Planchon says that even away from the officialdom of the Quai des Orfèvres he still finds it difficult to put into words what he wants to say.

When he finally does manage to do so Maigret realises that what he has just been told could have serious, perhaps fatal consequences. Accordingly, feeling sympathy for Planchon, Maigret extracts a promise that he will phone him every day.  He is not sure just what this will achieve but feels it will enable him to prevent the situation getting out of hand.

Whilst he realises that no crime has been committed, Maigret feels that he needs to make unofficial enquiries via Janvier and Lapointe to try to understand what he has been told and arranges for them to visit Planchon's house and speak to his wife. Their enquiries appear to confirm what he had told Maigret.

On Monday he receives the telephone call from Planchon that he had been waiting for, but it doesn't tell him anything more and Planchon puts the phone down rather abruptly, causing Maigret to suspect that he won't be calling again – a suspicion that turns out to be true. When it transpires that Planchon has left the house, apparently taking luggage with him and telling no one where he’s going, Maigret decides to make his enquiries official and the case becomes one of missing persons.

This is one of those novels in which Simenon demonstrates, perhaps even more clearly than usual, his concern for the ordinary man. Whilst the story does not contain the detailed investigation that we tend to expect in a Maigret novel, it succeeds on another level as we share his concern for a man whose life has been ruined by greedy, ambitious people, totally oblivious of the effect that their unfeeling behaviour can have on the lives of others.