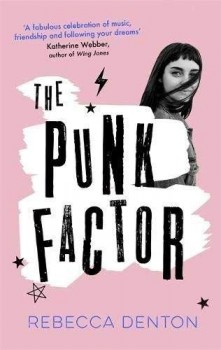 Seventeen-year-old Frankie is in a punk rock girl band with her best friend. To succeed in the music industry takes hard work, and that isn’t something Frankie is good at.

Seventeen-year-old Frankie is a hustler. She could sell ice-creams to penguins in Antarctica if she set her mind to it, but Frankie’s problem is that she doesn’t like hard graft. Although she says she’s committed to the punk rock girl band called Seven that she started with two friends, she doesn’t like practising. She wants success, but without having to make an effort.

Her best friend Haruna finds Frankie’s attitude difficult and wants her friend to commit properly to the band the way she has. For Haruna, the band is an escape from a difficult home life. Her parents split up when she was much younger and her father went to Japan and has had little contact with her since he left. Haruna nurses a dream of going to stay with him, but that’s not a dream likely to come true. Her mother is tied to a controlling man, in thrall to version of Christianity that seems close to being a cult. He’s abusive to Haruna if she seems to be stepping out of line, and it’s only by sneaking out that she’s able to have any sort of life away from her oppressive home.

Frankie’s family are completely different from Haruna’s. Her parents are caring in a chaotic, laidback way, and don’t seem overly concerned when Haruna declares her intention of finishing school early. They help her move out into a room in a house share.

Frankie is obsessed by her former boyfriend, Doc, who’s a member of a more established band, and Haruna rightly guesses that her friend is only interested in Seven as a means of getting closer to Doc in the hope of getting back with him.

When the band get a lucky break, Frankie has to decide whether she’s prepared to do the necessary hard work to ensure success. Haruna has other, harder decisions to take.

I was impressed by Rebecca Denton’s previous look at the world of teen bands in A Secret Beat, and The Punk Factor lived up to my expectations. Denton has a keen eye for teen culture and behaviour, and there’s the same unmistakeable air of authenticity about her writing that Chris Russell brought to his Songs About a Girl trilogy that only comes from an insider’s knowledge of the music industry.

The friendship between Frankie and Haruna lies at the heart of the story, with each of the teens getting a chance to tell their own stories. They are both vivid, well-rounded characters, as aware of their own failings as they are of each other’s. They drink, smoke, occasionally take drugs and sleep with boys. And they have to live with the consequences of their actions. I was with both girls all the way, alternating between cheering them on when things went well and despairing when events took a turn for the worst. Denton captures perfectly the intense highs and lows of teen life and sets them against the vivid but uncompromising backdrop of the music scene in a clever, sharp look at a very different life from the one most of us live.