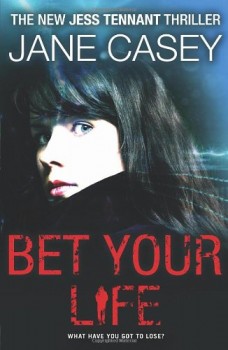 A boy is found in Port Sentinel, badly beaten and left for dead. Jess Tennant doesn’t want to get involved, but when her cousin and a friend plead with her to do some detective work, Jess finds herself inexorably drawn into the mystery of what really did happen to the seemingly popular and exceedingly rich Seb Dawson.

After her debut in How To Fall, Jess Tennant is now firmly ensconced in the life of the pretty – and very well-healed – seaside town of Port Sentinel, and isn’t missing her old life in London at all, although she is very happy to see one of her old friends, Ella, who’s come to stay for a while. What she’s less happy about is her recent break-up from boy-next-door and former boyfriend, Will Henderson.

There are times when it seems that the world, his wife and their dog are determined to keep Jess and Will apart, from Will’s dislikeable dad, local police inspector Dan Henderson, to Jess’s own father, who turns up and does an extremely good impression of the spectre at the feast in the home of Jess’s aunt and uncle. Jess is still staying there with her mum Molly, who’s now working in a local art gallery and the domestic scenes in that household are always great to read – funny, true to life and very well realised.

When a local boy, the seemingly popular and stinking rich Seb Dawson, is found in the middle of town during the Port Sentinel Halloween festivities, Jess is shocked, especially as she sees the state of him just before he’s taken away in an ambulance. And she’s also unconvinced by the party line of a hit-and-run being pedalled by Dan Henderson, a copper who doesn’t want the gloss of Port Sentinel to be tarnished in the eyes of the visitors it depends on for its prosperity.

When Jess’s cousin and her best friend, the injured boy’s sister, appeal to her for help in finding out what really happened to Seb, she does her best to stay out of it, but that’s not quite as easy as it seems and Jess soon finds herself up to her neck in the seamier side of Port Sentinel.

Jane Casey doesn’t shy away from the darker side of teen life in this excellent follow-up to her first young adult book. There’s drink, drugs, manipulation and worse, which lend a chilling undercurrent of reality to what might otherwise seem a seaside idyll. On top of all that, Jess is thoroughly conflicted about her love life – or lack of one. She spends much of the time vacillating between the sardonic Will and the charming, ever-flirty Ryan, while several of Port Sentinel’s teenage girls do their best to shit-stir, happy to see Jess in trouble.

The love triangle between Jess, Will and Ryan takes several unexpected turns, particularly after the two boys are forced into a fight at a house party where seemingly anything goes, but that strand of the story never threatens to turn the book from a young adult crime thriller into simply a teenage romance.

Jane Casey has a deft touch with characterisation. Her people of all ages simply leap off the page and promptly take on lives of their own. I even found myself developing a sneaking liking for Dan Henderson. As Casey has proved with DI Josh Derwent in her Maeve Kerrigan series, she has a very good line in bad boys, and I’m definitely a sucker for all of them.

Bet Your Life takes a darker turn than How to Fall, but Jess proves to be as resourceful and likeable as ever and as before, I’ve been left very much wanting to know what sort of no doubt unexpected turn her life in Port Sentinel is going to take next.