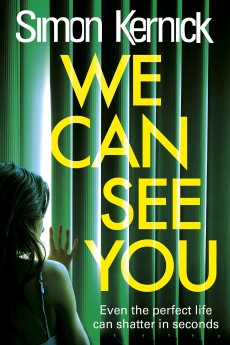 We Can See You

Brook Connor seems to have it all. But her life comes crashing down in ruins when her daughter is kidnapped. She can’t go to the police, as the kidnappers say they can see everything she does. The trouble is, Brook doesn’t even know if she can trust her own husband.

Brook Connor seems to have the perfect life. She’s done well out of self-help books and a slot on a TV channel and she’s building on that success with another book due out soon. She’s got the perfect husband and lives in a mansion in the wealthy suburbs of San Francisco. But Brook’s seemingly perfect life shatters when she arrives home to find her beloved daughter and the child’s live-in nanny missing.

Waiting for her is a mobile phone and a grisly reminder that the abductors aren’t to be messed with. When they tell Brook that they are watching her, she has every reason to believe them.

The kidnappers’ ransom demand isn’t huge, certainly not beyond Brook’s means, and she’s determined to do everything in her power to get her daughter back. Brook doesn’t know if there’s anyone she can trust, not even her suave, good-looking husband Logan. And that’s part of the problem for Brook. Not everything in her life is quite as simple as it might seem. She doesn’t want to take risks with her daughter’s life, but sometimes risks are necessary.

Simon Kernick is the master of the art of the unreliable narrator, and that’s something that’s starting to be a problem for me when I read his books. It’s a bit like discovering how the magician pulls the rabbit from the hat. Once you’ve been made privy to the trick, you can’t put it from your mind and just sit back to enjoy the show.

So from the start, I questioned Brook Connor and the motives for just about everything she did. I didn’t trust her. I didn’t trust the smarmy Logan, either, so from the outset, the list of characters I didn’t trust was starting to grow, and that’s when I took the conscious decision to stop second-guessing everyone and just settle down to enjoy the ride. And that wasn’t hard to do, as Kernick knows how to put together a good thriller.

The plot fairly gallops along, driven by short chapters from different points of view, jumping about in time like a fast horse over hurdles. It was clear quickly that Brook was under close scrutiny by the police, but the reasons for that only became clear over a more extended period and by then, I was thoroughly hooked, although the stylistic device of ending nearly every chapter on an internal cliffhanger that didn’t always get resolved immediately got old rather quickly. There was plenty of tension without the need to artificially ramp it up that way. His knack of creating believable people whose lives matter is more than enough to sustain interest.

Kernick carries off the US setting in style, something that not every British writer is capable of doing and I didn’t notice any missteps, but as a Brit, that’s not something I would necessarily pick up easily.

Yes, there is an unreliable narrator, a fact that won’t surprise any of Kernick’s fans, but he does play fair and the clues are there – you just have to be fully alert to spot them. I had my suspicions, but when the rabbit was finally pulled from the hat, it was done with an impressive flourish and was well worth waiting for. We Can See You is a stylish thriller with bags of tension that doesn’t in any way disappoint.