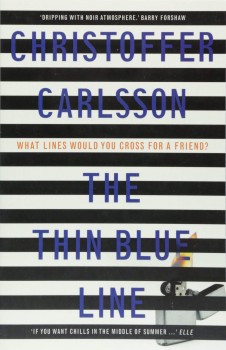 Detective Leo Junker has crossed many professional lines. But when John Grimberg, his oldest friend/enemy and a hardened criminal on the run, asks him to investigate a five-year-old case of a murdered prostitute, Junker has to face own demons from the past and corruption at the heart of the Swedish police force.

My first encounter with the detective Leo Junker (The Invisible Man from Salem) left me with an impression of a deeply flawed man, crossing various boundaries to reach the truth, whatever it may be, and unable to escape his troubled past. His misspent youth has been tightly entwined with the fate of his best friend and enemy John ‘Grim’ Grimberg.
Now The Thin Blue Line, which closes the quartet of books by Christoffer Carlsson, reinforces my initial view as neither Leo nor Grim learn from their mistakes though they’re fully aware of how their minds work, and they continuously try to operate within boundaries of their own moral codes to seek justice.
This analysis might sound rather convoluted but makes complete sense when you embark on the final instalment of Leo Junker’s story. The author, who has a PhD in criminology and lectures on the subject at university, has drawn generously from his professional experience to create a classic damaged Scandinavian detective, with a thoroughly modern twist. There’s no solitary drinking nor walking into dark spaces with no torch here, but instead a maze of difficult choices that keep the main character questioning everything all the time.
When Grim, a dangerous criminal on the run, delivers a photo of a murdered prostitute and asks to reopen the five-year-old cold case, Leo initially refuses. But he’s intrigued by the snippets of information about Angelica Reyes and potential dark secrets leading to her death and decides to convince his boss, the quite extraordinary Anja Morovi, (fantastic woman!) who runs Stockholm’s Violent Crime Unit, that solving this murder will put the department in a better light. Basically, another closed case is always a bonus.
But as Leo makes very slow progress, teamed with his colleague Gabriel Birck, he realises that dead Angelica was involved in a much darker web of connection. If he is to untangle this, he must be prepared to risk everything, including own life-saving relationship with girlfriend Sam and his professional integrity, until he crosses every line, the thin blue line dividing the worlds of good and bad, and exposes corruption at the heart of the police.
Birck as a partner in this investigation acts as a moral compass, and soon is also persuaded that they both need to keep digging. As the difficult search continues, a potential terrorist attack in Sweden looms and they are pulled in to deal with much more current threats. Grim keeps an eye on the efforts as he’s the main force behind re-opening the case and is still able to influence Leo.
The Thin Blue Line, in an excellent translation by Michael Gallagher, should be read as the finale but if you come upon The Falling Detective (book two) and Master, Liar, Traitor, Friend (book three), don’t hesitate to get into the raw and angry world of Leo Junker.