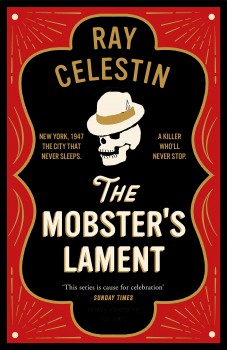 Investigator Ida Davis is called to New York by her old partner, Michael Talbot, to investigate the brutal slaying of four people in a Harlem flophouse for which his son faces the electric chair. As they delve into the case, Ida and Michael realise the killings are part of a far larger conspiracy.

Here’s a genuine mystery for all you would-be detectives. Who is Ray Celestin? His sketchy biog outlines a London-based novelist and screenwriter who studied Asian art and languages at university. That’s it! His publishers boast his spectacular arrival with The Axeman’s Jazz which won the CWA New Blood Dagger for best debut crime novel and the follow-up Dead Man’s Blues, was historical thriller of the year, and shortlisted for best crime novel.

This third instalment in his City Blues Quartet – which charts the histories of jazz and organised crime in America through the middle 50 years of the 20th century looks set to maintain that enviable record. It is both a gripping, quite brilliant, neo-noir crime novel and a vivid, panoramic portrait of New York – from its tenements to luxury hotels, ‘bebop’ clubs to the wharves of the Brooklyn waterfront – set at a time when organised crime in the shape of the Mafia is at the height of its power.

In the autumn of 1947, successful octoroon private investigator Ida Davis, who began her career as secretary to a drunken Pinkerton detective and now runs her own successful agency in Chicago, is called to New York by her old partner, former New Orleans police lieutenant Michael Talbot. He needs her help to investigate the brutal killing of four people in a Harlem flophouse for which his son faces the electric chair. The couple soon realise the deaths are part of a far larger conspiracy involving corrupt police and the all-powerful Five Families of New York’s Mafia establishment.

Meanwhile, Mob fixer and manager of the famed Copa Cabana nightclub, Gabriel Leveson, a survivor of the Jewish-dominated ‘kosher nostra’ which partly ran organised crime before the rise of the Italian gangs, wants to flee the city with money skimmed from a joint racetrack operation with Murder Inc boss Albert Anastasia.

His dream of taking his sister’s child to safety in Mexico and his own hopes of revenge on the brutal killer responsible for her death are dashed when Frank Costello, the capo di tutti capi tasks him with tracking down Mob money, apparently stolen by the executed Benny Siegel, the New York gang’s man on the West Coast, to finance his vision of turning the dusty desert town of Las Vegas into America’s gaming capital.

This clever and utterly believable story with a psychotic killer who even the Mafia worry over, is set in a brilliant and vibrant historical background in one of the world’s most multi-racial and fascinating societies.

Celestin’s New York is riddled with massive and endemic corruption, racism, casual violence and organised crime. His characters are totally realistic, from the back street whores and a black population swamped by a tidal wave of Mafia-imported drugs to the unwilling Mafia boss Costello, who struggles to preserve the ‘good years’ against his predecessor – and eventual successor – the far more violent Sicilian Vito Genovese.

But it is Celestin’s often deeply unflattering descriptions of the people and the town itself which make this such a memorable and genuinely compelling read. His rapidly shifting mixture of hectic pace, horrifying brutality, social comment, first-class historical detail and moments of surprising and genuine humanity climax in a denouement set in the city’s snow storm of the century.

Always in the background is the sound of jazz – and Ida’s childhood friend and former correctional home boy, Louis Armstrong, returns to New York at his lowest ebb. His big band is bankrupt, he’s playing to empty venues, and he’s on the verge of becoming a has-been, until a promoter offers him the chance to reignite his career.

The Mobster’s Lament is a storming book. Now solve the Celestin mystery and I’ll be really happy!