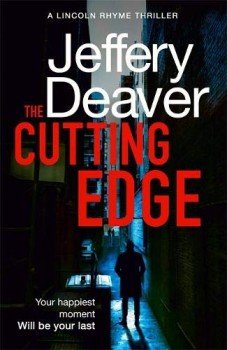 A serial killer with a strange affinity for diamonds is at work in New York targeting couples seeking the perfect engagement ring. Criminalist Lincoln Rhyme is drafted in to help make sense of the brutal murders.

Criminalist Lincoln Rhyme and his partner Amelia Sachs are called in to investigate the brutal murder of a diamond merchant and the couple who had visited him to buy an engagement ring. At first it looks like a simple theft, but it quickly becomes obvious that the crime is by no means as uncomplicated as it looks.

The only witness, Vimal Lahori, a young talented diamond cutting apprentice, knows he needs to get away from New York to be safe, but to do that, he needs money, and the killer is on his trail. Other diamond-related killings follow, with suspicions that the murderer is targeting engaged couples. He’s soon given a nickname – after all, no self-respecting serial killer can be without one.

Rhyme and Sachs bring their formidable talents to bear on the problem, with Sachs collecting the most minute traces of evidence, and Rhyme, determined not to be defined by his physical condition, analysing them with all the precision of a razor-sharp brain coupled with his immense collection of comparable data.

In the background, the ever-loyal Thom is there along with detectives Lon Sellitto and Ron Pulaski, both familiar faces from previous books. Vimal Lahori, who would much rather be a sculptor, is a sympathetic character, and I did a lot of angsting over his survival prospects, which for me is always the test of whether a character has been established well enough for me to care about them.

As ever, Deaver packs a lot into his books and there’s a side-plot – not particularly necessary, in my view – in which Rhyme takes an interest in the case of a notorious drug dealer who will shortly being going to trial, but his lawyer believes some of the evidence against him doesn’t add up and he wants Rhyme to use his expertise to ensure justice is done. The criminalist plays rather a lone game on this one, which doesn’t go down well with Sachs when she finds out, and his actions potentially leave Rhyme as an outcast so far as the NYPD is concerned. The side story is certainly not without interest, but equally well it could be seen as padding.

The identity of the killer doesn’t remain a secret for long, as passages start to appear from his point of view, but in any Jeffery Deaver book, it’s as well to always look below the surface, as that way you won’t be totally wrong-footed when yet another layer of the onion-skin narrative is peeled back. I saw a few things coming, but others left me scratching my head and wondering what had just happened. The only thing I wasn’t too keen on was the final twist in the tale, which is likely to be something of a Marmite moment for fans of the series.

I do like a book where even the info dumps are interesting, though, and Jeffery Deaver certainly succeeds on that score, as he delves deeply into the murky depths of the diamond trade. The Cutting Edge taught me a lot about diamond mining and the diamond trade and made me want to take another look at the diamonds in the crown jewels, despite the high admission costs at the Tower of London!