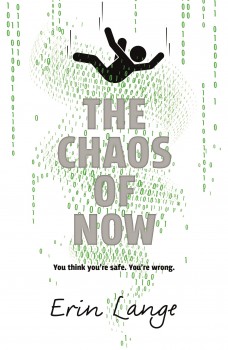 The Chaos of Now

Teenager hacker Eli Bennett is asked by two schoolmates to join them in an attempt to win a prestigious coding competition – and they aren’t prepared to take no for an answer.

Sixteen-year-old Eli Bennett will never forget the day one of his classmates walked into the school cafeteria and set himself on fire. Jordan Bishop had soaked himself in gasoline and lit a match. And for Eli, one of the worst things was that Jordan didn’t succeed in killing himself straight away. Due to the quick reactions of a lunch monitor with a fire extinguisher, Jordan lingered horribly until his life support system was finally turned off. In some ways, Eli blames Jordan for the effect his death had on his classmates, and those ambivalent feelings linger throughout this excellent YA story of high school bullying, hacking and friendship.

Eli is a skilled hacker and proposed new cyber-snooping laws introduced in the wake of Jordan’s death don’t sit well with him. The internet is Eli’s playground. He prides himself on his ability to find his way into any system, but he has a secret he needs to hide. One of his triumphs was hacking the police security system and finding – and publishing – information on a lot of undercover cops. He hadn’t anticipated the consequences of his actions and was horrified when the home of one of the police officers was firebombed. He hadn’t meant to do harm, but as a justification, that’s not likely to cut much ice if he ever gets found out.

When Eli is approached by two schoolmates, Seth March and a boy nicknamed Mouse to join the team they want to enter for the American Cybersecurity Competition, a prestigious annual hacking and coding challenge, he’s initially flattered, but isn’t sure he wants to get involved. Seth and Mouse aren’t prepared to take no for an answer, though. They want Eli’s skills and they’re prepared to resort to blackmail to get him on board. They say they want justice for Jordan, but there are indications that things might not be quite so simple …

The Chaos of Now isn’t likely to appeal to parents who are already worried about what their kids get up to online, but for anyone with experience of online life, it’s a very different matter. Today’s teenagers fight a constant battle against parents who want to know what they’re up to every minute of the day, many of whom have an inherent distrust of what teens get up to on their laptops and mobiles. For some teens, an online life is the only private space they can carve out for themselves, but that comes with risks, and it’s those risks that cyber-security measures are intended to mitigate. It’s all very laudable, but just don’t expect computer-savvy kids to like or accept such restrictions. Eli and his friends certainly don’t.

The teens are well-drawn, and Erin Large does an excellent job of drawing out the moral dimensions in the book without ever talking down or preaching. Actions are shown to have consequences rather than being brought out through the heavy-handed medium of tell that’s all too common in the adult end of the genre.

I liked Eli and had sympathy with him, especially as his relationship with his best friend Zach comes under strain as a result of his liaison with Seth and Mouse. Zach’s a decent guy who finds it hard to understand why Eli has suddenly formed such an attachment to the other two. Seth and Mouse are more ambiguous and it’s clear they have their own agenda, it’s just not clear what it is.

And in the background there’s the shadow cast by Jordan Bishop’s suicide. He’s one of the hardest characters to understand – teen suicide is a difficult subject and it’s not one that Large shies away from, although some of the revelations might not win her many friends.

The Chaos of Now builds strongly on the success of Rebel, Bully, Geek, Pariah and cements Large’s reputation as a writer who really gets the thorny problems that teens grapple with on both sides of the Atlantic. It’s not a comfortable book for concerned parents, but then I don’t think they’re the target audience. And that’s also fair enough. Teens need their own spaces free from parental influence and control as well.