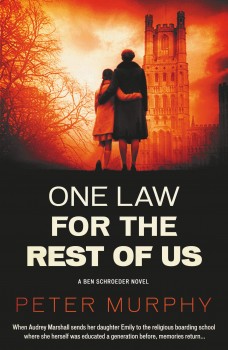 One Law for the Rest of Us

A revelation of sexual abuse by a child blows open her mother’s repressed memories of the same treatment she suffered – but will the legal system offer her redress?

One Law for the Rest of Us is a story of child abuse at a boarding school starting in the 1940s and still going in the 1970s, revealed sufficiently in the mid-1970s to enable those responsible to be put on trial under the legal rules then applicable. As the tale unfolds, it becomes clear that the accused at that time were much better protected than those who had suffered, and until the end of the book it is uncertain whether justice will prevail.

The court cases which take up most of the book were set in motion by Audrey Marshall, whose eight-year-old daughter Emily reports to her mother that she has been assaulted at the Lancelot Andrewes school in Ely where she is a boarder. The shock of this revelation breaks a dam of memory within Audrey repressed for some 30 years, the memory that she too was assaulted as a child at the same school.

Audrey is lucky enough to have contacts in the police and in the legal profession, and the Director of Public Prosecutions is persuaded that there is enough evidence to put the headmaster on trial. However, conviction proves problematic. At the time, evidence from a child was regarded as unreliable without corroboration. And the recovered memory which forms Audrey’s corroboration is unfamiliar at the time. As a result, the jury are unable to reach a decision.

A further attempt to bring to trial the headmaster and other men involved, some of whom are now public figures, also fails. Even a civil case is undermined: although several of those assaulted as children at the school come forward action has to be taken before six years has elapsed, and in most cases it is too late. Unless a means can be found to give greater exposure to the offences, it seems that the culprits will avoid judgement.

Much of the action throughout the book takes place in court, with appearances from Ben Schroeder who will be familiar to those who enjoyed Peter Murphy’s series starring this character, as well as other legal solicitors and barristers. There is a suitably dastardly solicitor and barrister opposing, providing plenty of fiery exchanges and hostile arguments wrapped up in court language.

Sections by Audrey herself explain her feelings, including her reflections of the skill of her counsel, and this all helps to enhance the understanding of his efforts. They also counterbalance the forensic attitude of the court and introduce a more human touch. Those who work in this field might find the story interesting from the perspective of how much the scene has changed, which I think if anything is underplayed. While there is plenty to appreciate here, however, it comes across more as an illustration of a legal situation than a story about real people.