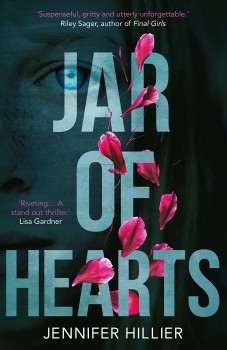 Geo kept a secret for 14 years – one that destroyed her childhood and eventually sent her to prison. She has served her time, but the destruction is far from over.

Angela, a beautiful 16-year old with her life ahead of her, and Geo and Kaiser’s best friend, disappeared one night after a party.
Over a decade later, Angie’s remains are found in a wood near Geo’s home. Calvin James, Geo’s former boyfriend, was the one who killed her. But he was not alone on that fateful night, and now the two remaining of the teenage trio face one another from opposite sides of the law – Detective Kaiser Brody and Geo, a rising star in the Seattle pharmaceutical industry.
Kaiser wants to know why Geo protected her boyfriend for so many years, leaving him free to become the Sweetbay Strangler, a serial killer without remorse. But Geo tells no-one why during her five-year prison sentence.
Now Geo is free. She has served her time. She is a changed woman, and ready to try life on the outside. But Calvin James is free too after escaping prison. And murders, shockingly like Angela’s, have started again.
From the opening paragraphs, the author’s uncomplicated writing style drew me in. Although this is a third-person point-of-view story that time-hops, that much is in the present tense, and the author gives the reader realistic introspections and word-choice, there is intimacy and immediacy.
Unfortunately, as the plot unravelled, I found it difficult to connect with Geo. Although she is multi-faceted, some sides are contrived. It is almost as if the author is using her ghastly experiences to manipulate the reader into rooting for her. The author uses an overload of woe-is-me themes to justify Geo rather than focussing on one that is deep and highly developed. By the denouement, the word sensationalism had crept into my head.
Kaiser is a teenage boy in a detective’s body whose continuing obsession with Geo is worthy of therapy or a slap. He is a major character who shows no growth. Kaiser makes poor life choices because of his fixation on Geo, including having an affair with a married woman. Whilst I understand the whole emotional pull of a first love, I do find this overused in fiction. Perhaps I am wrong, but I find it hard to believe someone would not move on from teenage unrequited love (other than a one-off kiss), unless they were to become a serial killer!
Without giving away any spoilers, Calvin’s unrealistic, out-of-character behaviour chewed at my suspension of disbelief. Georgina’s prison friend and her father are underdeveloped props to give a humane dimension to a main character whose despicable acts have an unrealistic foundation.
Although there are thrilling aspects to this story, there is little mystery about Geo. This unfortunately leads to an anticipation of the final twist from early in the book. Geo is an ugly character whose remorse is superficial and unconvincing. She certainly does not deserve the predictable ending. The addition of chilling, intense scenes of sex and violence may be difficult reading for some.
My final thought is some aspects of behaviour and organisation in the fictitious prison sound decidedly unresearched, unrealistic and convenient. That said, I am keen to read more of Hillier’s fresh, confident voice. And I am certain this book will resonate with Girl on the Train fans.