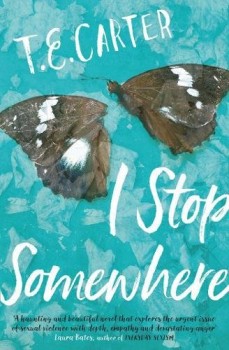 Ellie Frias is over the moon when rich, good-looking Caleb Breward takes an interest in her, but the fairytale romance soon turns to horror.

Ellie Frias is the sort of girl that very few people notice. She’s never stood out in the crowd, and that suits her just fine. She just wants to be accepted for herself. So when Caleb Brewer, the good-looking, confident son of a prominent local businessman, takes an interest in her, Ellie is flattered, and starts to fall in love with Caleb, despite his occasionally brusque and uncaring treatment of her. Ellie discovers how far Caleb and his brother are prepared to go for their kicks, and her disappearance rocks the small town.

No one knows that Ellie is still there. No one can see her. No one can hear her. But she can watch how events unfold after she goes missing and she is forced to watch other girls endure what she went through, powerless to help them – or herself.

I Stop Somewhere is told in the first person by Ellie herself, forcing the reader to feel what she feels in a strong, intimate portrayal of the consequences of rape and murder. Although Ellie herself is detached from subsequent events, lacking the ability to influence the fate of the other girls who are abused by Caleb and his brother, there is nothing detached about the visceral power of Ellie’s thoughts and the anger that threatens to consume her.

The portrayal of Ellie’s father, tormented by the absence of closure, is very powerful. He brought up Ellie after she was abandoned by her mother, and his love for his daughter leaps off the page, even though his hopes are slowly fading. I just wanted everything to be all right for him, even though I knew there was no possibility of that.

TE Carter unflinchingly explores the difficult themes of abuse, rape and murder and demonstrates how much privilege counts when it comes to a police investigation, especially when set against Ellie’s far less advantaged background. At times, Caleb Breward seems almost untouchable, sheltered by his father’s wealth and connections.

Against that backdrop, it’s hard for Ellie to believe that his victims – including her – will ever get justice. Despite the sometimes dreamlike quality of the writing, this is no fairytale, and there are certainly no handsome princes or happy-ever-after endings. But there is hope, and ultimately, that’s what matters.