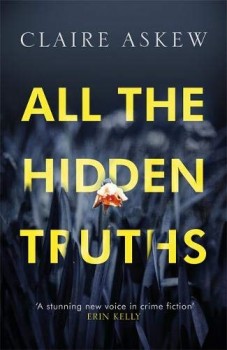 All the Hidden Truths

Ryan Summers, a young student equipped with three guns, enters Three Rivers College and immediately begins shooting girls. He kills 13 of them and then himself. Everybody wants to know why but there appears to be no answer to the question.

Moira Summers sets out one morning to spend time in Edinburgh's National Library of Scotland studying for her OU degree. However, put off by the gaggle of noisy schoolchildren queueing up to get in, she changes her mind and decides to go for a walk – not quite sure to where. Eventually, she finds herself, perhaps by force of habit – outside the old Royal Infirmary, where she used to work as a young staff nurse. At that moment an ambulance arrives carrying a young man whose chest had been impaled by a metal rod.

For some reason, perhaps because he is about the same age, she finds herself saying her son's name, Ryan, indicating that he had been on her mind. She begins to think about the terrible news the boy's mother will be receiving and is suddenly aware that she has to do something she has been putting off. She must have a serious conversation with her son as soon as possible.

The second woman to whom we are introduced is newly promoted Detective Sergeant Helen Birch. She’s been informed about the accident to the boy, has looked up the item on the internet and finds that he is the same age as her brother Charlie had been when he disappeared 14 years ago. He has never been heard of since.

As usual, whenever she begins to think of her brother, she cannot get the thought of him out of her mind. It is obvious that she is still deeply affected by the intense sadness his disappearance caused her. She prays that if the accident to the boy becomes a police matter she will not have to handle it.

Ishbel Hodgekiss is waiting to pick up he daughter Abigail from Three Rivers College which she attends. Abigail, however, is late and when she arrives and is asked why, she lies about where she has been, eventually swearing at her mother and telling her to mind her own business. Ishbel is aware that relations between her and her daughter have become very strained and knows that she can expect no support from her husband Aidan, whom she can no longer tolerate. In fact, she now knows that, had it not been for Abigail, she would have left him long ago.

All three women are thrown together when a horrific incident occurs. A young man equipped with three guns walks into Three Rivers College and begins shooting. By the time his ammunition is expended he has killed 13 girls. He keeps one round in his gun which he then uses to kill himself. It turns out that the young man was Ryan Summers.

The novel explores Moira's attempts to deal with the knowledge that her son is a multiple murderer, Ishbel's with her loss and Helen's with the memory of hers. The author takes on the difficult and sometimes harrowing task of trying to place herself in their lives following an occurrence that has horrified the nation. That she succeeds in this is beyond question.

But, as well as three women, there is one man. Newspaper reporter Grant Lockley maintains that he is a public servant who believes in free speech. He says it so often and behaves in such an apparently gentlemanly way that at times he is almost believable and it is not difficult to see why he has earned himself a number of admiring followers on social media.

To any thinking person, however, he is a hypocrite who represents the very worst excesses of tabloid journalism. He has raised plausible insincerity almost to an art form, is impervious to any snub and – worst of all – entirely indifferent to the effect his writing has on the lives of other people. Such is the scorn that the author feels for him that he is the character who makes the most impact, the one we remember long after finishing the book.

it is unlikely, though, that any editor would allow articles to be printed that are arguably libellous. However, such was my interest in the way in which the story develops, that I could easily forgive what is probably only a mild overstatement.

It has to be asked whether the author provides an explanation of why anybody could commit an atrocity of this nature. The answer – not one that would satisfy everybody – is that human beings can be so desperate and so out of touch with reality that it can happen. That answer enables us to accept an ending where the mother of the murdered girl and the mother of her murderer are attempting to put the past behind them. What else could they possibly do? It is an appropriate and intelligent ending to what is an excellent debut novel.