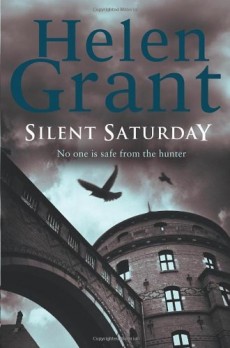 Veerle longs to escape from her controlling, neurotic mother and the boredom of life in suburban Brussels. A secret society devoted to exploring hidden places provides exactly what she needs, but it also brings danger.

Knowing that a book is the first of a trilogy can be a double-edged sword. I feel like I’m immediately faced with the question of how well an author will deliver a book that works as a standalone as well as proving enough of a hook to leave me wanting the next one. But in both respects, Helen Grant very easily lives up to those expectations in Silent Saturday, the first of the Hidden Spaces trilogy, a series of young adult thrillers set in Belgium.

Veerle de Keyser lives in a suburb of Brussels with her mother, Claudine. Veerle has a hard job enjoying herself when her mother does everything she can to keep her at home where Claudine thinks she’s safe. Veerle ends up feeling smothered and frustrated, the latter even more so because Claudine’s obsessive behaviour seems rooted in an event in Veerle’s childhood that Veerle simply can’t remember, no matter how hard she tries.

Tantalisingly, a window opens onto that blank area of her memory when Veerle meets a childhood friend, Kris Verstraeten, who was with her the day she climbed up a church bell tower to find out whether the bells really do fly to Rome to bring back Easter eggs on the day known in local folklore as Silent Saturday. Veerle saw something that day that she subsequently blocked from her memories, something that has been haunting her mother ever since.

Meeting Kris again opens a window onto an exciting new world for Veerle, a world of ruined chateaux, empty houses, deserted buildings and the thrill of illicit exploration. Veerle’s rock climbing skills come in handy in her new hobby, as she discovers the excitement of breaking the law but doing no harm. Part of the game is that in each property they visit, the idea is to do some small item of maintenance to leave things a little bit better than they way they found them, so no harm is done.

When one of the group goes off line and disappears, Kris is concerned and together with Veerle, he does his best to trace her, but that isn’t easy as in most cases, they only know each other by their chosen on-line names. Then when Veerle sees something through the window of a house she was about to break into with Kris that she thinks might have been a dead body, suddenly their game has turned very serious and Veerle has been left with a huge dilemma. Report what she saw, or protect her anonymity?

Helen Grant paints a vivid and engaging pen-portrait of Veerle, Kris and the forbidden spaces that they explore, where Veerle tries to balance her need for freedom from her controlling mother with her obvious love for her and desperate desire not to cause her any more distress. Veerle’s compassion shines through very clearly and at times watching her mother’s blatant manipulation of her daughter’s feelings makes uncomfortable reading and I was positively willing Veerle to make a break. But then Claudine’s genuine distress and vulnerability would surface and it was easy to understand why Veerle was still tied to her mother, unable to abandon her in the Flemish-speaking part of Belgium as her mother only speaks French.

Silent Saturday is a beautifully written and extremely engaging book that makes full use of its setting. It’s absorbing, at times chilling, and always compelling. And as an added bonus you’ll start to learn to swear in Flemish.