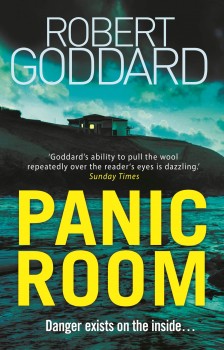 A simple valuation job turns out to be more complex than estate agent Don Challenor had expected.

Estate agent Don Challenor is somewhat down on his luck due to some dodgy dealings that didn’t go down well with his previous employers. So he’s happy to clutch at straws when Fran, his solicitor ex-wife, offers him the chance of earning some easy money by doing a valuation on a property in Cornwall that’s being sold by one of her clients. After all, two grand, plus accommodation and travel, isn’t to be sneezed at.

To Don’s surprise, there’s someone in residence at the expensive property in Wortalleth West – Blake, who says she was employed by the owner, billionaire Jack Harkness, to look after the property. But according to what Don has been told, the house is owned by Harkness’ wife. Fran wants vacant possession for her client and is happy to pay Don extra to achieve that.

Don might not be averse to a bit of sharp practice, but he’s good at his job, and his measurements in the house quickly throw up an odd discrepancy, convincing Don that the house has a secret room, even though no one claims to know anything about the existence of a panic room in the house.

Robert Goddard’s books are characterised by ordinary people in everyday circumstances that soon take a somewhat left turn, and Panic Room is no exception. The story is told from the alternating points of view of Don and Blake, with the changes signalled by the use of a different font, as their two stories interweave through a leisurely narrative that positively exudes an air of mystery and barely-veiled threat.

The mysterious void at the heart of the house is the proverbial elephant in the room, an additional character that casts a long shadow over the story. Add to that a suave villain and his brutal Russian sidekick, and the menace is ramped up in a satisfactory manner, as Don gets roped into trying to get to the bottom of two separate disappearances – one a woman in her early 20s who went missing a long time ago, and the other a local boy whose mother believes was killed by the elusive Jack Harkness, now restrained by an ankle tag in London as he awaits trial for fraud.

There’s a lot going on in Panic Room, and I’m not at all convinced that every sub-plot was necessary. The book is somewhat over-cooked, with rather too many random ingredients. A local witch and a whiff of the supernatural is an unnecessary seasoning, adding little to the strength of the book, and I found Don’s willingness to run around the countryside in search for the truth about a woman with whom he had no connection a bit difficult to swallow.

The reveal, when it finally came, didn’t live up to the premise of the rest of the book. I found it wholly unbelievable, as if Goddard had built the set-up with no thought as to what really lay inside the mysterious room. The ending felt rushed and my sense of disbelieve came crashing to earth with an unwelcome jolt. Goddard failed to sell his central premise to me, and in consequence, this let down an otherwise intriguing variant on the classic locked room mystery, which is a shame, as the book promised so much more than it actually delivered.