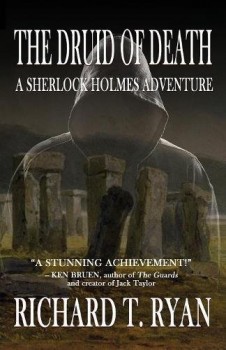 The Druid of Death

When a body is found at Stonehenge on the vernal equinox, Lestrade calls on Sherlock Holmes for help.

When a body is found at Stonehenge on the vernal equinox, Lestrade calls on Sherlock Holmes for help.  Although Holmes arrives at the scene of the crime with all speed, there are few clues to the murderer’s identity, apart from the young woman’s mutilated body. Yet it is clear there is something sinister in her murder that goes beyond the frames of normality. Her organs are outside her body, in a disturbingly similar fashion to the still unsolved Whitechapel murders. But this murder is different. The branches arranged around the corpse, the Druidic symbols on her forehead and the date of woman’s slaughter point to savage druid activity.

The lack of clues frustrates Holmes, Watson and Lestrade in their efforts to find the murder. And although Watson knows his friend is a terrier that won’t let go until he has solved the mystery, the days turn into weeks and eventually into months.

Then on the summer solstice, another body is found. And the sight of his mutilated corpse confirms Sherlock’s worst fears. The murders have only just started.

Sherlock Holmes is an industry that has reached far beyond the death of his creator. There are many purists who curse authors who jump on the Conan Doyle band wagon. And they undoubtedly cringe at any screen adaptation that post-dates the 1960s. I prefer to take the stance that as long as it is well written and has a captivating story, I am a potential fan.

Sadly, this book does not meet my criteria. The plot is timeworn and transparent, relying on a bit of shock-horror to make it stand out. But even that gore rides on the wake of the infamous murders of Jack the Ripper. The language, dialogue and scene setting are poorly executed imitations of Doyle’s poetic writing, leaving The Druid of Death as not much more than a parody of the original stories.

However, there are worse crimes inside this book than the one Sherlock must solve. First, much of the conversation is nothing short of a history-geography lesson. It reads as if the author has fashioned a plot to suit a subject that fascinates him, or that he has done an immense amount of research about Druids, mythology and historic sites of the United Kingdom and is determined to share every minutiae with his readers.

The second unexpected crime is the abundance of mistakes that took me right out of the story, including some glaring spelling errors that jump off the page and so distort the meaning of the sentence that they had me laughing out loud. Overall, I found The Druid of Death a disappointing read.