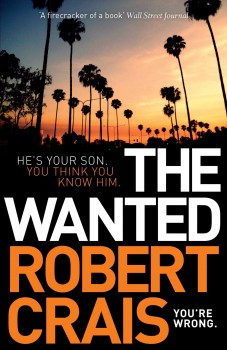 A worried mother calls in PI Elvis Cole when she finds a $40,000 watch in her son’s bedroom. Cole makes a connection to a series of burglaries in the city’s poshest areas. The boy flees – and killings follow.

Originally from Baton Rouge, Louisiana, Robert Crais has long been based in Los Angeles, where he made his name as a scriptwriter for hit TV series such as Cagney & Lacey, Miami Vice and Hill Street Blues. His series featuring private investigator Elvis Cole and his former Vietnam buddy Joe Pike – this is the 17th – owes much to his working background and his location.

The story runs on rails by now – just like an episode of one of his TV shows. The attention to detail, location and atmosphere are all still there, but there’s little to make a reader think or remember the content once the set is switched off.

Crais is the latest in a dynasty of writers who have made the City of the Angels their focus. From the immortal Raymond Chandler and his hard-drinking, womanising PI Philip Marlowe, to James Ellroy who so brilliantly maps LA’s secret history, he charts the venality of Hollywood.

His LA differs hugely from Chandler’s – it’s more ethnically diverse, with parts which are purely Chinese, Vietnamese or Lithuanian, but it’s still a place where people from all over the world come to try to realise their dreams in a city where crisis and crime are endemic and which itself is built on the shaky ground of the San Andreas Fault.

In this near standard-issue private eye story, wisecracking, Hawaiian-shirted Vietnam veteran Cole is hired by the worried mother of a socially awkward, video games obsessed and always hungry teenager who has found a $40,000 Rolex and sums of money in his bedroom. When he uncovers a connection to 18 unsolved burglaries in LA’s ritziest neighbourhood the boy flees – and people begin to die.

The Wanted is cleverly plotted and stylishly written, but right through to its bloody climax it’s so relentlessly predictable. Only the hit men are fleshed out as characters. The rest are merely cardboard stereotypes – the grumpy cop, troubled slacker teenagers seeking easy money ... Despite the fine writing and the humour which distinguish it, as always, this story is distinctly run-of-the-mill with a fairly underwhelming ending and isn’t one of Crais’ best.