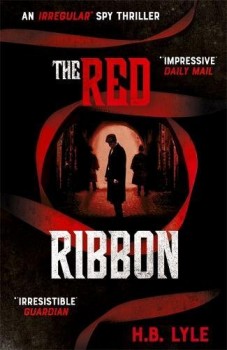 Wiggins, once leader of Sherlock Holmes’ Baker Street Irregulars and now an unwilling member of the fledgling security services, must run down government leaks which threaten Britain’s security while pursuing his own mission of revenge.

In the welter of rubbish that has emerged since the end of copyright on Arthur Conan Doyle’s great Sherlock Holmes stories, one name – HB Lyle – stands out like a beacon. His development of the character of Wiggins, once leader of Holmes’ Baker Street Irregulars, is something Doyle himself would have been proud of.

This sequel to screenwriter Lyle’s brilliant debut with The Irregular, is another triumph of historical ‘faction’, linking Doyle to Fleming in an only part-imagined description of the early years of Britain’s intelligence services, the political dramas of the years leading up to the First World War and the transformation of the women’s suffrage movement into the more militant suffragettes.

In a scenario which bears astonishing parallels to current events, prime minister Herbert Henry Asquith, known as Squiffy for his fondness for alcohol, is propped up by Irish votes, but threatened by a series of highly-placed leaks which undermine not only a weak government but also threaten the safety and security of the Empire.

Captain Vernon Kell, codename ‘K’, Britain’s first head of counter-intelligence, has his own problems. The Kaiser’s Germany is rapidly arming. Lenin is fomenting Communist revolution in Russia and across Europe. Anarchists are everywhere and Indian dissident nationalists are actively courting Britain’s enemies as they attempt to free the Jewel in the Crown from British rule.

His only asset to combat all this is former guttersnipe, thief, soldier and debt collector Wiggins – recommended to him by his old friend Holmes, who again makes a cameo appearance.

Kell does not get on with starchy Naval Captain Mansfield Smith-Cumming, ‘M’, responsible for foreign intelligence and who is convinced that only officers and gentlemen can be effective spies. He is also under constant pressure from the ambitious Irishman Sir Patrick Quinn, head of the police Special Branch, who has strong political backing to absorb the newly created agency into one home security unit.

The death of Edward VII; the debacle of one of Cumming’s first ventures, an attempt by non-German speaking Royal Marine officers Trench and Brandon to penetrate the German base of Borkum; the brutal police handling of the ‘Black Friday’ suffragist demonstration outside Parliament; strikes by miners and dockers; all culminating in the Siege of Sydney Street when police and army units fought a gun battle with an anarchist gang allegedly led by Peter The Painter, all form a febrile background to Lyle’s story.

Historical characters, such as the intensely ambitious – and hardly trusted – Home Secretary Winston Churchill, rampage through the pages. While his ‘Reds Under Every Bed’ McCarthyism may upset his legion of worshippers, who’s to say in retrospect he was totally wrong? His days of glory were yet to come. Interesting historical aside – as wartime PM in 1940 he was to fire the ageing Kell for underperformance!

The facts are bound together in a fascinating and fast-moving story which equally captures the gravity of the Cabinet Office, the plush salons, clubs and brothels of Mayfair, and the filthy Edwardian backstreets of South and East in impressive period detail, with convincing colour and sharp dialogue.

Wiggins, intelligent, observant, impulsive, violent, surly, with an unhealthy liking for booze, but a gentleman at heart if not by upbringing, is driven by a burning desire to avenge the death of his best friend at the hands of Peter The Painter. He is the glue which holds the story. More Deighton’s Harry Palmer than Fleming’s suave Bond, he is nevertheless totally believable and gives the story its distinct flavour of the two worlds of Edwardian England.

He is brilliantly backed by beautifully drawn lesser character: Kell himself, his long-suffering wife Constance, an unfulfilled suffragist who finds herself irresistibly drawn towards the suffragettes and in doing so reveals a formidable courage and character, ‘Soapy’ Pears, a typically effete and devious Cabinet Office mandarin, even the prostitutes at a Belgravia brothel and Wiggins’ street sources all have their parts to play in this superb evocation of London in 1910.

Read this entertaining, satisfying sequel – which works equally well as a standalone – and enjoy a great book which may soon be translated into what should be an eminently watchable TV series!