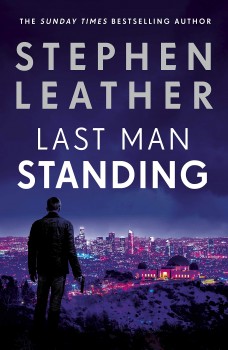 SAS trooper Matt Standing receives a plea for help from the sister of someone who once saved his life, and Standing isn’t someone who can turn down a friend in need.

Matt Standing, an SAS sergeant busted back to the ranks until he can control his anger management issues, first appeared in a sub-plot in Light Touch, one of Stephen Leather’s Spider Shepherd thrillers. But here he gets star billing, and it’s Spider who takes a back seat.

The book opens with one of Leather’s trademark firefights, set in the badlands of Syria where Standing is embedded with a team of Navy SEALs. There’s plenty of action, and Standing demonstrates how cool he remains in combat, proving that the amount of money it costs to train one special forces soldier is money well spent – if you want them to stay alive. The opening chapter has more relevance to the main plot than usual, as one of the SEALs, Standing’s friend Bobby-Ray Barnes, is injured in a IED blast saving Standing’s life.

Six months later, Standing is contacted by Bobby-Ray’s sister, who pleads for Standing’s help. Bobby-Ray is in trouble, but Kaitlyn Barnes is reluctant to talk on the phone, leaving Standing with no alternative other than to ask for some long-overdue holiday and fly to the States, where it soon becomes clear that his friend is in a whole heap of trouble.

After being invalided out of the SEALs as he was no long fit enough to dive, Bobby-Ray turned to the bodyguarding business – close personal protection, as it’s known in the trade, but in this case, it was anything but protection. Bobby-Ray’s principal, a Russian oligarch, has been gunned down along with two of his bodyguards and Bobby-Ray was seen fleeing the scene of the shooting. The FBI are not looking for anyone other than Bobby-Ray and no one other than his sister is prepared to give him the benefit of the doubt until Standing arrives.

I like Matt Standing a lot as a new series character. He’s tough but not overly macho, and although he’s exceptionally good at what he does, he never comes over as a pumped-up superman. When he takes on multiple bad guys – and generally wins – it’s easy to see how he gets the edge on his opponents and in that respect, Leather’s writing is a finely-honed combination of both show and tell.

The action is hard-hitting but never impossible to believe and the minor characters are fleshed out enough that their fates matter. Leather peppers the narrative with the sort of technical detail that anyone reading military thrillers these days has come to expect, and despite his lack of first-hand experience, there’s enough of a ring of authenticity, although there’s some odd capitalisation that occasionally threw me out of the moment.

It was good to see appearances by Spider Shepherd in a professional capacity, as well as Richard Yokely, the enigmatic and frequently unprincipled American who reports directly to the President. And I’m sure I won’t be the only person quailing at a combination of Yokely and the current incumbent of the White House. There’s plenty of topical stuff here, including the current hot potato of Russian interference in US politics. Last Man Standing is a fast read, but if you look beneath the surface, there’s plenty to find.