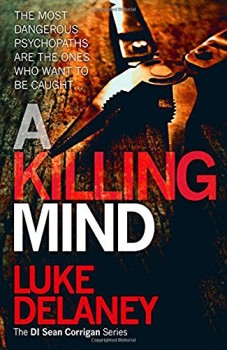 A serial killer is at work, taking grisly trophies from his victims. DI Sean Corrigan’s bosses want results, and they want them fast.

DI Sean Corrigan has been kicking his heels in something of a backwater for a while, waiting for a murder investigation to land in the lap of his investigation team. He finally gets his wish when a connection surfaces between the murder of a drug-addicted homeless man living in a garage and the earlier killing of a sex worker, also with a drug habit. The similarity between the two murders is the fact that both victims had their nails ripped out and teeth removed. As none were found at the scene, the unescapable conclusion was that the killer was taking trophies.

With the murders having all the hallmarks of a serial killer, Detective Superintendent Featherstone wants to employ Corrigan’s talent for bringing an end to this sort of problem. Corrigan is a man with a somewhat chequered history. He has a good clear-up rate, but he also has a bad habit of going off-piste in an investigation, putting himself – and sometimes others – at risk. But on the plus side, Corrigan is very good at getting into the mind of a killer and analysing crime scenes from a different perspective, which give him insights that provide an edge in difficult investigations.

There’s no mystery about the identity of the killer in A Killing Mind. He’s introduced early on; we know his name, where he works and his personal circumstances. We even know his motivation. He wants to be even more notorious than Sebastien Gibran, Corrigan’s first big-name case. Gibran is locked up in the secure psychiatric facility, Broadmoor, but even from there he’s capable of casting a long shadow. He’s talking to Geoff Jackson, an investigative journalist, who’s writing about Gibran and his crimes, but then the killer starts offering comment on this latest contender, and things start to escalate …

I like Sean Corrigan as a character, but five books into the series, I do expect him to have learnt from some of his mistakes. His marriage is getting dangerously close to the rocks as his long-suffering wife gets understandably fed up with him never coming home on time to see her or their kids in the evening, and never putting their needs ahead of those of his job. And his tendency to play the part of the maverick hero is getting slightly over-worn. The other problem is that the books have now become all about him. He’s the sun around which all the satellites revolve. With the reintroduction of Gibran, it all loops back to Corrigan.

For someone who is meant to have an uncanny connection with the minds of killers, he makes a lot of very basic mistakes, and certainly doesn’t learn from his past actions, but he’s still one of the few characters that can tempt me into the serial killer end of the genre with any certainty. I enjoyed the character development that Corrigan’s sidekick DS Donnelly gets as he works through his own trauma arising from the death of the killer known as The Jackdaw at Donnelly’s hands. He’s about the only character who seems to make any forward progress.

I want to see Sean investigating crimes that don’t just revolve around him and his past. Trapping him in that loop isn’t doing him any good. He deserves the opportunity to put his undoubted talents to work without his creator needing to thump him over the head regularly with the stupid stick.