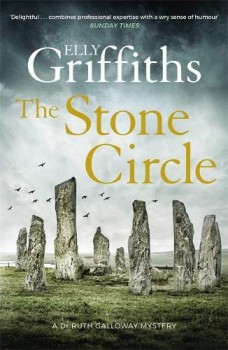 Archaeologist Dr Ruth Galloway and DCI Harry Nelson encounter some unwelcome echoes from the past when bones are discovered on an ancient Norfolk site.

It’s hard to believe that Elly Griffiths is now 11 books into her archaeological series which, despite two minor missteps, feels as fresh as the day university lecturer Dr Ruth Galloway set eyes on grumpy cop DCI Harry Nelson, and much murder, mayhem and romantic confusion ensued.

In the wrong hands, this series could have turned into a soap opera, with over the top characters and their complicated love lives, set amidst the bleak scenery of the East Anglian coast. But Griffiths continues to flesh out an always convincing cast – and, most importantly, characters the reader can care about and who can still surprise us.

I mentioned that – perhaps inevitably – the series has had a couple of books that didn’t quite work. Both had what felt like a charabanc of characters taken out of their comfort zone (OK, Norfolk), and transported to Lancashire and then Italy. It confirmed for me that part of what makes this series so compelling is the setting, which ranges from small towns to a fairly obscure university to Ruth’s remote coastal cottage.

And that setting is absolutely dead-centre in The Stone Circle, which has strong echoes back to The Crossing Place, the first book in the series. Ruth is called to the discovery of bones on the site that holds so many memories for her. And there’s a particularly unsettling blast from the past when she sees one of the archaeologists working on the site. Meanwhile, Nelson is receiving bizarre letters that hark back to a previous case.

Griffiths is at her adept best when it comes to juggling the crime element that harks back to a missing girl from 1981, complex family trees and the tangled private lives of the cast. Sometimes it feels that the only character not getting their end away is Ruth’s cat Flint!

But these characters aren’t static – Griffiths has used the series to weave new people and passions in and out of the genre plots. So there’s a new baby for Nelson and his wife Michelle, as well as another appearance for Ruth’s would-be suitor Frank. Amidst this, Ruth and Nelson’s daughter Kate, the result of a one-night stand, continues to grow up serenely unaware of her parents’ lingering angst. Cathbad (who, in other hands would definitely be a hippy-dippy cliché) and his eminently sane police officer partner Judy also play a key role in the book. And there are more fleshed-out appearances for Nelson’s two grown-up daughters, and for Cathbad’s journalist daughter Maddie.

Aside from a slightly too quick and convenient reveal to one plot element, The Stone Circle is Griffiths back on imperious form. She had me mithering over the characters, as well as squeaking my way through a particularly harrowing scene in thick fog at Stanton Drew stone circle in Somerset, followed by a drive back to Norfolk in pelting rain – trust me, Griffiths does weather and louring atmosphere better than anyone.

There are some useful and amusing potted biographies at the end of the book that will clue in newcomers. But I wouldn’t bother starting here – go back to the beginning and enjoy the intricate ride. That way you’ll end up where I am – twitching nervously as to what will happen next as Griffiths leaves one intriguing strand dangling. Just so long as it all happens out east, I’ll be happy!