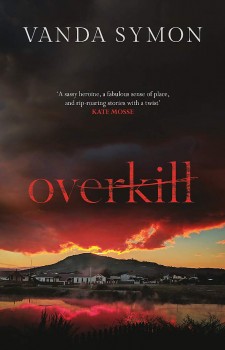 Sam Shepard, the only policewoman in the small rural town of Mataura, New Zealand, investigates the death of a young mother. Apparent suicide was in fact a murder, and the victim was married to Sam’s ex-boyfriend. Sam finds herself the main suspect and suspended from duty but decides to find the killer anyway and clear her name.

Overkill’s opening chapter might seem a bit of an overkill in its horrific introduction to the crime happening in a tiny New Zealand town. It gives a truly gruesome description of the death of Gaby Knowes, a young mother who is killed in a sadistic way, in front of her small daughter.
The murderer went to great lengths to made it look like a suicide, and that’s what the local police is initially faced with. Local police being just Constable Sam Shepard, the only officer at the Mataura station, late 20s, passionate about her job. Sam’s training and determination kick in as soon as she searches Gaby’s house and then, guided by own intuition, follows a possible track through fields to the river where she eventually finds the lifeless body on the bank, with the help of others. But something doesn’t quite seem right as nothing indicates that Gaby had reasons to take her own life.
So far so typical. Yet the very committed and ambitious Sam soon lands in trouble. The only thing that she fails to do by the book is to inform her colleagues that handsome Lockie, Gaby’s grieving husband, is her ex-boyfriend for whom she still carries a torch. And it’s a huge torch. She’s convinced that everybody in the neighbourhood knows of the relationship and has gossiped enough since the break-up, so she feels there’s no need to step back from the investigation, as she is the best person to know the local environment and to understand Lockie, who reluctantly gives in and allows her to look through Gaby’s possessions, including her computer and notes from her journalism course.
Sam follows the dead woman’s trail of thought and some notes while suspended from duty. She decides to work undercover, humiliated by the allegations and treatment as the main suspect (jealousy being the perfect motive to dispose of a rival). She doesn’t stop in pursuing the killer and clearing own name, makes some massively bad choices based on emotions rather than pragmatism, risks own life, and experiences much more cow-related stuff that she would ever wish for. This includes manure. Of course nothing escapes scrutiny in such a small community.
Rural areas with their local connections, secrets and way of living are perfectly portrayed in Overkill, and the sense of place recalls another small island across the world where very often moral choices really depend on the small community’s existence. However, Iceland is not that far away in terms of dealing with geographical restrains and possible fears of a potential threat from outside. Living in what’s described as ‘back of beyond’ makes a huge impact not only on how the story develops but also on the people themselves and how they perceive what’s right and what’s wrong, their moral compasses often moving with the weather.
Vanda Symon effortlessly balances the chilling search for the murderer and tightening the symbolic noose around Sam’s neck with well-depicted physicality of the small place. The classic scenario of personal involvement in the case could have been set in any place on earth but in Overkill the Antipodean flavour adds something very special to the overall mood of this well-crafted mystery.
The key to the novel for me is definitely the humorous portrayal of the one-woman police band, both extremely naïve and too eager to prove herself in the eyes of her superiors and against the silent backdrop of her parents’ disappointment. Sparky dialogue with her saintly patient roommate Maggie and dynamics between these two women are priceless.