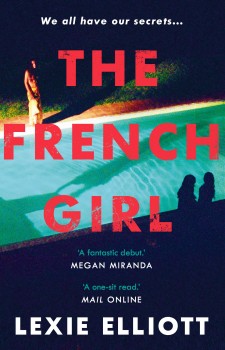 When they find a girl’s body ten years after she disappeared, Kate Channing’s memories and friendships unravel in a dark place.

Ten years ago. Three young women and three young men have all just graduated and to celebrate, they drive down to the Dordogne to stay for a week in a holiday cottage. Then Severine, the beautiful girl from next door, appears, changing the dynamics. Tensions rise, and the holiday ends with Kate and Seb splitting up.
Today. Kate is running her fledgling head-hunting company in London. She is still best friends with Lara, one of the members of the holiday gang, and keeps contact with Tom. But she has no time for Caro, the third girl, and cannot bear to even think about Seb, her ex. Theo, the last member of the group, is dead.
Severine’s body has been found, and investigations will throw the estranged group together again as evidence points towards one or more of them being the killer. Deceit and omissions twist with visions of Severine, shredding Kate’s memories of that fateful week. She needs to know what happened, but the truth could be worse for her than ignorance.
I hate silence, and because of that, the television is always on in the background. However, it also provides me with an interest-gauge; the less attention I pay to the programmes, the more whatever I am doing is absorbing me. Sadly, I read some books whose quality is such that even the interminable TV advertisements are more captivating. Although far from perfect, The French Girl grabbed my attention and is not one of them. Within the first page, the background noise faded to zero. I read and read, not noticing the daylight dwindle. My cup of tea went cold. I forgot dinner. I had to finish this book. And I did in one easy sitting, despite it being relatively slow-paced.
The plot is not particularly original; a cold-case-Agatha-Christie-esque whodunit. But the writing is sharp, tight and well edited. The characters are a little stereotyped and their behaviour is somewhat predictable. However, I can almost forgive this weakness because the author shows a talent for racking up the tension from the first page and keeping it going until the reveal. She clearly has a good understanding of the complications of friendships and the doubts running through people’s minds that cause shifts in relationships. Every change in Kate’s beliefs is convincing.
There is a flawless balance between introspection, action and dialogue. The dialogue is honed, if a little generic. The introspections are credible, although I found Kate’s inability to let go of a relationship that had floundered a decade ago worthy of a slap. If I do have a criticism about the major characters’ behaviour, it is about the amount of booze they chuck down their throats and how they stagger between being drunk or hungover. But perhaps that is me being provincial and not party to the London scene.
There is scant reference to place; just enough that we sense the majority is set in London. The Dordogne setting is even less developed. My cynical head did wonder if that was because the author had no experience of south-west France, but my forgiving head said better to have too little detail than false information.
The French Girl is an exciting, tension-rich debut novel, with an assured voice.