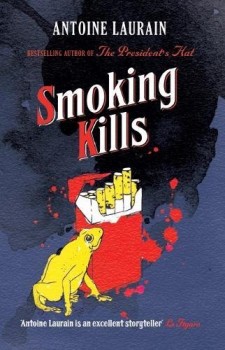 Fabrice Valentine’s new relationship with cigarettes is about to make him a killer.

Fabrice Valentine is a successful head-hunter in an office in Paris. But his world is changing. There is a new ban on smoking in all workplaces, and little by little, he and his smoking colleagues are shunted outside to the indignity of lighting up like seedy outcasts.
Goaded by his non-smoking wife, even though they met over a piece of art that Fabrice mistook for an ashtray, he sees a hypnotist who stopped a mutual friend’s nicotine habit. The session is a success. However, Valentine loathes such a change to his own personality, his imbued habits and lifestyle: smoking will never again grant him any pleasure. He needs this gratification when his cigar-smoking boss falls off this mortal coil before officially announcing Valentine will be replacing him, and a non-smoking outsider is suddenly ruling the roost.
After a series of stressful events he starts smoking again, relieved to find that the urge has returned. However, the pleasure has gone. Angered and determined to have that aspect returned to him, Valentine makes another appointment with the hypnotist to reverse the procedure. But the hypnotherapist has gone. And instead, in pursuit of that elusive pleasure he is determined to retrieve, Valentine finds himself on a dark road towards the ultimate crime.
I love black comedy, so was keen to get stuck into this latest Antoine Laurain story. In little more than 200 pages, Laurain serves up a wickedly clever tale, and the translation is almost faultless. Félicitations to the translator, Louise Rogers Lalaurie.
As a French resident of many years and privy to the French attitude on cigarettes, laws and life, the story had me giggling from the first pages. Smoking Kills is not just about the human need for crutches and our addiction to them. This is also the story of the human need for fulfilment, for fathers, for love, for esteem and recognition, and the rage that can overwhelm when these are removed. Oozing droll French sensibility, the story is a perfect blend of black comedy and social commentary.
The first-person narrative of an utterly unrepentant smoker is in turns snarky, witty, and a bit tragic. It has an amusing and believable supporting cast, and I smiled at Valentine’s journey down the dark rabbit hole. As a hypnotherapist, I can fully understand where his first session went wrong, which makes his angst believable. As a law-abiding smoker, I am now worried about giving up!
Having read some of the introspective-heavy French classics, including La Gloire de Mon Père (My Father’s Glory – a story where absolutely nothing happens), I was acutely aware of this story plodding in the middle. And without the humour, it would have been another book with too much contemplation and not enough action. At times the constant cigarette references were overdone, but the wonderful and witty writing made up for it.