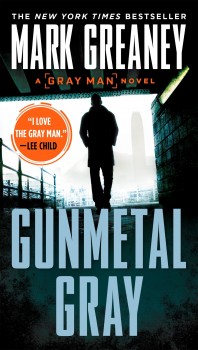 Court Gentry is back with the CIA and his first mission is to find a defecting Chinese cyber-expert and bring him or his knowledge back to the US.

His CIA handler tells the Gray Man, the world’s deadliest assassin, Court Gentry, that his report ‘sounds like something from a bad movie.’ That’s putting it too mildly! This latest in the series is just so far over the top as to be laughable.

Mark Greaney was a collaborator on the great Tom Clancy’s Jack Ryan novels. But whereas Clancy based his stories on just about believable fact, his science accurate, and kept his heroes and villains decidedly human, Greaney seems to have opted for a maximum of violent action, hundreds of corpses and buckets of blood – a combination surely aimed at the lowest common denominator of readership.

The jacket blurb says in researching The Gray Man series he travelled to ten countries and trained in firearms, battlefield medicine, and close range combat. In a varied career involving the Army and crime reporting I have come across some genuinely hard and dangerous men, ranging from Australians to Zulus and from every country in between. Not one would have even considered taking on up to 50 knife or handgun-armed opponents, while themselves unarmed, in a seedy Far Eastern dockside bar brawl with any hope of survival, but for Gentry it’s just another incident in a busy unreal day!

To the plot. After five years on the run dodging CIA assassins, Gentry is suddenly called back to the American espionage organisation. His first mission gets off to a distinctly difficult start when within hours of his arrival two Chinese agents try to kill him in a Hong Kong hotel.

He disposes of them, and then his high-stakes hunt for answers sees him criss-cross south east Asia, involved with or opposed by parts of various national armies, governmental agencies and Triad or other criminal gangs.

It also leads to his old friend, the former British MI6 operative Donald Fitzroy, who is being held hostage by the Chinese after failing on a contract to find Fan Jiang, a former member of an ultra-secret cyber warfare unit responsible for testing China's own security systems who has apparently defected. The Chinese want Fan killed, but the first two teams Fitzroy sent to find him have disappeared and the Communists have now decided to ‘supervise’ the next operation at a high intelligence level. What they don’t know is that Gentry’s mission is to find Fan and get whatever intelligence he has to the US. To do that, all he has to do is get out alive and, being the quixotic man he is, save his old friend too.

Gun battles involving the North Vietnamese Army, a Russian special ops team, led by a beautiful but deadly woman, various criminal organisations including the ’Ndrangheta, the mafia-style Naples-based gang responsible for much of Europe’s drugs and people trafficking litter the pages, along with plenty of product placement.

Gentry himself is a complex character – he has to be for the author to take hundreds of pages explaining how he manages to kill so freely and yet retain his morality. The comic book explanation, suitable for an American audience reared on John Wayne, Jack Reacher and the Man With No Name, is that he is a good person who just happens to do bad things to accomplish a mission for the good of his country.

This impossible, long-winded narrative – many readers will find it tempting to skip at least a third of most pages – is too complicated and too confusing even for a holiday read. If you try it, you’ll probably need a holiday to get over trying to sort out the various protagonists!