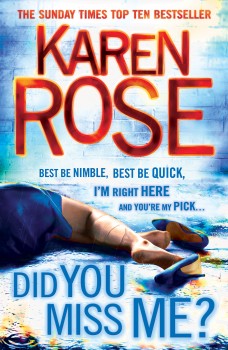 Did You Miss Me?

The son of an American state attorney goes missing with his girlfriend, and his mother and FBI friend lead the hunt.

A boy and his girlfriend disappear, not any boy, but the son of assistant state attorney Daphne Montgomery. It’s not clear whether this relates to the trial in which Daphne is prosecuting a member of a known problem family or perhaps to something more sinister from her past.

FBI Special Agent Joseph Carter is assigned to the case and as more victims appear it becomes a race against the clock to find the perpetrator. The relationship between Joseph and Daphne begins to play a significant part in the search for the boy, his girlfriend and his possible abductor.

Karen Rose maintains a high level of suspense throughout. This is skilfully done and some of the mechanisms become apparent. For example, close reading reveals small gaps left in the action which the reader can easily fill using their own imagination, often worse that the reality of the story. Or alternatively it appears that all the details in a scene will fit two characters – ensuring an almost automatic jump to a wrong conclusion. And certainly there is an attempt throughout to evoke sympathy for the good guys and be fearful for their safety in the unfolding horror.

The plot is complex but much also appears to be driven by the extensive set of characters and their responses to the unfolding drama. Many of these characters are familiar, the same investigator team as in previous novels by Rose although with a focus on different members of the team this time.

As before, the main characters are developed in depth. This is helped by the tactic of often recording their thoughts in italics. One minor complaint might be that the investigators can often be just too worthy. An attempt is made to balance their noble thoughts and intentions with the occasional more negative traits, but this does not quite work. The romantic attachments in particular seem a bit forced. However this counterbalances the sheer horror that is often portrayed in the story. This and the associated suspense can become overwhelming – it can all become just too grim to continue reading at times.

Dialogue throughout is appropriate to the characters and often of textbook standard. One example that stands out is a scene in which the FBI agent questions a suspect. This could certainly be used as a teaching example to train people in the art of questioning. Similarly it feels as though Rose is writing from personal experience when recording the main character’s thoughts about a previous experience of cancer, insights which vividly describe some of the more emotional effects of the disease.

Although similar in concept to some of Rose’s previous novels, DID YOU MISS ME? stands out for the high quality of the writing and the compulsive nature of the reading experience.