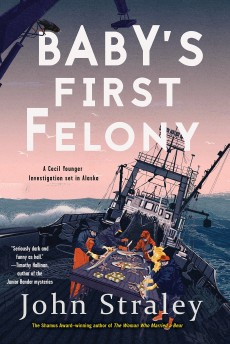 Criminal defence investigator Cecil Younger’s favour for a client gets him into bad trouble. And when his daughter is kidnapped, he has to take extraordinary measures.

Cecil Younger is an investigator for the Public Defender Agency in Sitka, Alaska. Most of his clients face penalties for drink, drugs or minor assault, and are in need of a little help. So when repeat offender Sherrie asks him to retrieve a box which might help her avoid a domestic violence charge, Cecil agrees.

Unfortunately, the box turns out to contain a large sum in cash. Cecil decides the best course will be to return the box, but back at the grimy apartment complex where he got it he finds minors being abused. His reward for trying to intervene is a beating, and eventually a threat – execute Sherrie or his own daughter will be killed. Blossom, a troublesome teenager, has been kidnapped. In his attempts to locate her Cecil becomes witness to several murders as well as a meth-dealing conspiracy, which merely places him under even greater risk, as well as being shot.

Cecil has seen enough of local police involvement with dodgy goings-on to know that he cannot rely on them to help, despite his wife Jane Marie’s belief to the contrary. He can see only one way out, a plan which requires the help of the dossers and alcoholics with whom he is familiar through his work. Fuelled by whisky and meth Cecil brushes a lung shot aside and springs into action, but unsurprisingly things do not go entirely to plan.

The major part of the book is rendered in the form of explanatory evidence by Cecil to the court, setting out his perspective on the events detailed. A court judgement follows, which gives details of just what price Cecil has paid.

The final section is entitled ‘Baby’s 1st Felony – A Guide to Avoiding a Life in Crime’. This summarises the wise advice presumably accumulated by the author in some 30 years at the same job held by the subject of the book, and in the same town. Selections appear throughout the text and add highlights to a generally amusing commentary, with frequent reference to some of the stupid things said or done by those faced with arrest. The most cogent advice is to say nothing when faced by the police, other than to request a lawyer. Wise counsel, I do believe.