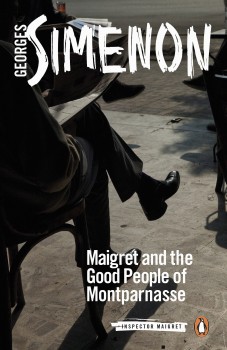 Maigret and the Good People of Montparnasse

René Josselin is a retired businessman living a comfortable life and generally regarded as a good man. It comes as a great shock when he is found one evening shot dead in his armchair.

Maigret has just returned from holiday and is finding difficulty in slipping back into his usual routine. He receives a telephone call in the middle of the night from an acquaintance, Detective Inspector Saint-Hubert, informing him that a prosperous former businessman, René Josselin, has been found murdered in his apartment. It seems that Saint-Hubert has been instructed to bring Maigret in on the case. He says he has already informed the public prosecutor's office and the Police Judiciaire and that Quai des Orfèvres will be in touch any minute.

It becomes immediately obvious to Maigret that the murder is not the result of a burglary since nothing appears to have been stolen or even disturbed. However, as he begins to interview Josselin's daughter and her husband, as well as other witnesses, he encounters nothing but affection for someone regarded as a good man. His business partner, his cleaning woman and the concierge are all of the same opinion. Furthermore, everyone in the apartment has an alibi, later confirmed, and there is no suggestion that there has ever been any disagreement with the other families in the building.

All that Maigret can do in these circumstances is pick up whatever information he can from outside sources, including anyone who might have been accustomed to seeing Josselin on his daily morning walk. He makes use of Torrence and Lapointe and even joins them in their questioning of the locals, eventually having some success. The one thing of which he is fairly certain, however, is that both Madame Josselin and her daughter, whilst telling him the truth, are concealing something.

Maigret's inquiries eventually bear fruit when a waiter in a local bar reveals that he had recently seen Josselin in the company of another man. When it is further revealed that this same man had also been seen in the company of Madame Josselin, things appear to be falling into place.

For a Maigret investigation this is a somewhat routine one and the answers are finally obtained by adherence to a strict procedure, tempered with a certain belief, based on his considerable experience, that something is being hidden. This family may be 'good people of Montparnasse', they may live quiet and comfortable bourgeois lives, but something is being withheld and, without knowing precisely how, Maigret can sense it.

This is not one of the most eventful Maigret novels but it is always interesting, not least because we are reminded that even apparently happy families frequently have secrets that they do not wish to reveal to the outside world.