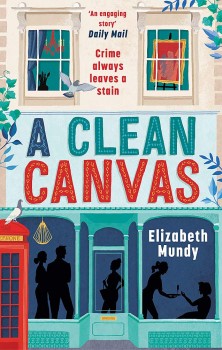 When a valuable painting goes missing from a London gallery, suspicion falls on Lena’s cousin Sarika, but Lena is determined to clear her name and find the real culprit.

One of the heartening thing about crime as a genre is the number of excellent debuts that find their way into print, and In Strangers’ Houses was one such last year. But the test of how successful a book was for me is whether I want to pick up the sequel and even after enjoying the first book, it’s not always a certainty that a sequel will fight its way to the top of an ever-tottering book pile. Elizabeth Mundy need have no fears on that score. As soon as I saw A Clean Canvas, I knew I was going to be back on board.

Hungarian cleaner, Lena Szarka, is now running her own cleaning agency, Lena’s Cleaners. The name perhaps wasn’t the wisest choice, leading to frequent mispronunciations for her first name, but that’s something she’s learning to live with. What she’s not too happy about, though, is being pushed into employing her cousin Sarika, who doesn’t quite live up to Lena’s exacting standards of cleaning and time-keeping, but family is family, as Lena’s mother is fond of reminding her.

One of Lena’s cleaning jobs is in a London art gallery, which is hosting an exhibition of modern art, featuring a piece called A Study in Purple by Trudy Weincamp, who is coming over for the private viewing. Lena isn’t impressed by most of the art, and her internal monologues make amusing – and irreverent – reading. Lena doesn’t know much about art, but she knows that she doesn’t like dusting a sculpture made out of rusty nails and other pieces of scrap metal.

When A Study in Purple is stolen, the finger of suspicion points to Sarika, who disappears at the same time as the painting. Lena is certain Sarika is innocent but to prove that she needs to find her cousin and catch the real culprit. Her friend PC Cartwright gets roped into Lena’s investigation, and the pair make an entertaining duo, with Lena in the driving seat again.

Cosies aren’t a part of the genre I venture into very often but I’ve recently become hooked by Rachel Ward’s Ant and Bea mysteries featuring a supermarket checkout worker and her shelf-stacking sidekick, and the Lena Szarka stores are out of the same mould, characterised by sharp observation through the eyes of everyday characters who provide a different angle on ordinary life. Lena’s work gives her insights that others often lack, and her job gives her the perfect excuse to get close to a range of suspects. Teaming up with Cartwright keeps the plots grounded and brings in the element of police work when needed.

Lena’s observations on art and the London art scene are sharp and funny, and Munday spins a complex tale into an impressive web that Lena is well-placed to unravel as she delves deep into the world of art theft and dodgy dealings. And next time you’re in an art gallery, I guarantee you’ll view the exhibits from the point of view of the poor person who has to dust them! Lena would never have put up with the mess Tracey Emin left her bed in, either.