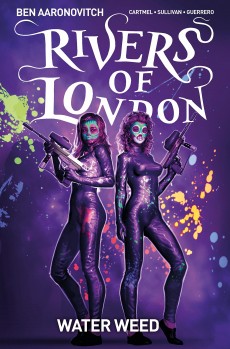 Drug dealing on the River Thames takes on an added dimension when a pair of river goddesses get involved.

Billy and Nick are risking trouble driving a speedboat without due caution on the River Thames, causing problems for slower craft and disturbing the wildlife on the banks, but even though that’s only the least of their crimes, it’s not the Marine Policing Unit that gets involved. The Thames has other ways of protecting itself…

The hapless pair end up being kidnapped by the young river spirits Chelsea and Olympia, who promptly confiscate the drugs Billy and Nick were running and start to get some inventive payback for the trespass on their territory, much to the amusement of their older cousin Beverley Brook, who happens to be the girlfriend of London copper DC Peter Grant.

Beverley also takes a share of the confiscated drugs to a party, which doesn’t meet with Peter’s approval, especially when just getting a whiff of the smoke is enough to give him a nasty vision of a man, bound hand and foot and trapped somewhere. Peter smells more than just pot, there’s vestigia in the air – the tell-tale sign of magic use.

The latest in the Titan Comics Rivers of London series is an action-packed romp through London’s waterways, attractively captured on the page by Lee Sullivan who does an immaculate job of bringing Ben Aaronovitch’s lively cast to life on the page. Seeing the characters as I’ve always imagined them is an added bonus, and Peter’s handsome, urbane boss, DI Thomas Nightingale. is a special treat.

I loved the exchange between the two of them on the subject of drugs, when Peter somewhat shiftily says he didn’t inhale on purpose, and Nightingale comments that when he was Peter’s age, heroin was legal. Readers familiar with the series will know that Nightingale is getting younger rather than older, due to a magical accident.

The plot is clever, taking various stereotypes and turning then on their heads in a story that’s always fun and never predictable. Each outing in this series is as bright and fresh as the vibrant colours, courtesy of Luis Guerrero and Paulina Vassileva. I like the way each of the stories has some linkage with earlier ones in the series and I particularly enjoyed the amusing cameo appearance from Beverley’s Russian gangster gardeners, in league on this occasion with Chelsea and Olympia and, as ever at Bev’s beck and call.

In the capable hands of Aaronovitch and Andrew Cartmell, this is a series that’s going from strength to strength, and for fans of Nightingale who have always wanted to know more about the Battle of Ettersberg, there’s a treat in store in the next graphic novel…