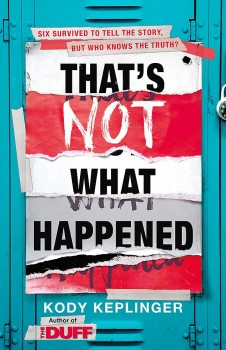 That's Not What Happened

Three years ago, a massacre at Virgil County High School left six traumatised teens struggling to make sense of what happened. Now survivor Lee Bauer wants the truth to be told. But the truth is not always welcomed with open arms.

hree years ago, Virgil County High School hit the news in the worst possible way. Nine people were killed by a teenager with a gun, leaving six terrified survivors, all traumatised teens. One, Sarah McHale, became known for her courage in defying the killer, made strong by her faith and the cross necklace she was wearing. Now old wounds are about to be reopened. Sarah’s parents are telling their daughter’s story in a book about the massacre.

Five of the six survivors are still a close-knit group, spending every anniversary in close contact. Lee Bauer is very conscious that once they leave the school, all direct memories of the murders will start to fade. She wants her friends to write their stories down so that the truth will be known, but there are aspects to the truth that not everyone will welcome, especially not Sarah McHale’s parents.

That’s Not What Happened doesn’t shy away from a painful subject. In the UK, mass shootings are rare, but in the US, it’s a very different story. Kody Keplinger shines a penetrating light into some very dark places, as Lee persuades her fellow survivors to tell their own stories, while she grapples with her conscience and the knowledge that the public’s perception of events will take a battering if what she knows enters the public domain.

Virgil County is the sort of place where everyone knows everyone else and the pressure on Lee quickly mounts as her story starts to be known. The church closes ranks around the McHales and Lee starts to understand the pressures that were brought to bear on Kellie Gaynor, the sixth survivor, who moved away from the area and is reluctant to be contacted.

The teens, Lee, Denny, Miles, Eden, Ashley and Kellie, all come over as strong, distinct characters, each with their own painful, penetrating story to tell. Lee is an excellent narrator. Her faith in the need to tell the truth behind her last few desperate moments hiding with her best friend Sarah in a toilet cubicle is unshakable, but gradually she realises that nothing is as simple as she first thought. The truth hurts, and at times, the truth divides rather than unites.

That’s Not What Happened is a brave book that cuts to the heart of the brutal reality of any mass shooting and a school shooting in particular. The dead are all given names and personalities except one – the murderer. There’s little sense of what drove the killer to his actions and that holds up a mirror to reality, where that is all too often the case.

I turned the final page with a sense of very profound relief that I live in country where mass shootings are very rare, and an equally deep sense of despair that the USA seems to show no sign of learning from its lack of gun control.