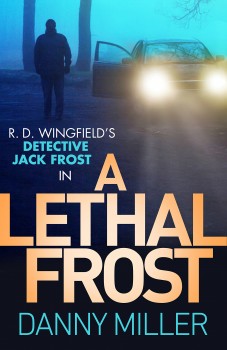 When a local bookmaker is shot in the head and seriously injured, Denton copper DI Jack Frost is under pressure from his boss to find the culprit as well as having to pacify his landlords by tracking down an escaped parrot.

Author and radio dramatist RD Wingfield is probably best known as the creator of the scruffy, anarchic Detective Inspector ‘Jack’ Frost, who works in Denton, a fictional town in the Midlands. The series seemed like it had ended after six books when Wingfield died in 2007, but then in 2017, a series of prequels surfaced, penned by James Henry. Wind the clock back to 1981, and you have the early days for Frost as a young detective sergeant, and a new set of police procedurals. Henry wrote the Frost prequels, but now the baton has been passed to Danny Miller to continue the iconic detective’s escapades in his latest outing, A Lethal Frost.

It’s now 1984 and Frost has risen to the rank of DI. He’s as scruffy and unpredictable as ever, continuing his mission in life to irritate the hell out of his boss, the staid and stuffy Superintendent Stanley Mullet, who cares a great deal about appearances and his role as president of the local golf club, where he gets to hob-nob with the great and good of Denton. Mullet is very keen on clear-up rates, so when local bookmaker George Price is shot in the head in his car after a day at the races, Mullet is very happy when it seems they have a suspect in their sights very quickly, but Frost isn’t so sure that the man they’re after is the shooter.

As ever, Frost has troubles of his own, and in this instances it’s the need to find somewhere else to live, as well as the task of tracking down Monty, an escaped parrot, who just happens to be the reason Frost needs to find somewhere to live in a hurry, as he made a bad job of parrot-sitting duties and accidentally allowed the bird to escape. And to complicate matters further, it looks like a drug-running gang is moving onto Frost’s patch and flooding the town with cheap heroin.

In A Lethal Frost, Danny Miller quickly proves a safe pair of hands for the series. The storyline has the usual complex web of plots that followers of the series have come to expect. One strand alone was never enough to satisfy Frost’s creator and his imitators work to the same formula. Miller has a good grasp of the characters, but as with the earlier books, they don’t really feel like they are portraying a young Frost, they feel more like a continuation of the original series. For those who remember the TV series, it’s hard not to see David Jason in the role, and conjuring up a picture of the scruffy, slightly shambolic main character is easy.

Miller does a good job of bringing the characters to life and handles a large cast deftly. The writing is occasionally a little clumsy and the period detail can feel slightly heavy-handed, but the book fits well into the series and is another enjoyable outing for Denton’s most anarchic detective.