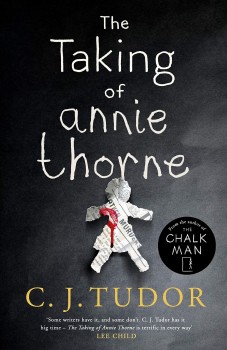 The Taking of Annie Thorne

After 25 years, Joe Thorne is going home. That’s because someone has emailed him to say whatever happened to his sister is happening again.

Arnhill, Nottinghamshire, is a slumped, weary village, a brooding, malevolent scar where evil happens. This time a single mother has killed her son then committed suicide. Most will never understand her blood-written note; Not My Son. But Joe Thorne, long estranged from his childhood village does, and it has something to do with the pit near the disused mines.
Now he has faked his way into a teaching job in the local high school and is renting the woman’s cold, ominous cottage. Although he wants to do the right thing for his sister, Annie, his return is not entirely altruistic; he is an alcoholic and a gambler with debts who wants to stay under the radar until he has amassed some money.
Joe doesn’t expect a warm welcome, yet he hardly has time to drag his crippled leg over the threshold before new and old villagers make it painfully clear they want him gone. But Joe is stubborn and desperate. Until he knows what truly happened to his dead sister, to the boy who jumped off the school roof 25 years ago and the reality of the latest deaths, he’s going nowhere.
I am certain that many readers and critics will pounce on this story, screaming Stephen King rip-off. My answer is there is no such thing as a new plot. Uniqueness comes from the writer. It happens through writing style, the characters on the page, and the perspective amongst other aspects. So, while there are parallels here, it is of no consequence.
I thoroughly enjoyed CJ Tudor’s debut novel, The Chalk Man, and applauded her gift for writing with a male voice. This story, also written from a middle-aged man’s point of view, is no less convincing. The Taking of Annie Thorne, written in the first person, time hops between Joe’s youth and today. The past is utterly believable with scant but significant nods to the era through dialogue, description and childhood accessories. And Tudor takes no less care with details that plant us in the present. The village is as real and vibrantly down-at-heel as the set for EastEnders thanks to sharp, witty observation and a magical writing style that is as senses-driven as it is well edited. The village and the pit are nasty but lifelike characters.
I cannot say I like Joe Thorne. He is an ugly anti-hero with few redeeming features both as an adult and child. But he is believable, recognisable and well developed, even if his flaws are overdone in places. In fact, none of the characters are likeable, except for Beth, one of Joe’s colleagues, and Marcus, a pupil. And be warned – one character’s arc is distinctly downhill. But they are all realistic and most break from the stereotypical.
This is a gnarly, twist-infused thriller with elements of horror and the supernatural. The last part may not appeal to some readers, particularly as the supernatural aspect leaves loose ends. I presume the author is allowing the reader to make their mind up about the role of the unnatural versus the imagination in this novel. While I don’t like plot holes, a few flapping strings sometimes make a story more memorable, as in this case.