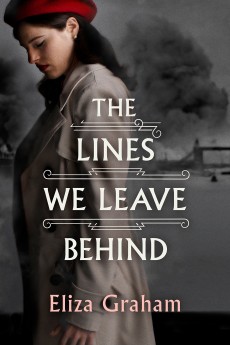 The Lines We Leave Behind

A young woman is incarcerated in an asylum, charged with a violent crime of which she has no memory. As she struggles to come to terms with her past an entirely different character emerges.

This fascinating and deeply affecting story is based on a part of the last war which remains largely unknown and not often represented – Britain’s tortured and at times contradictory involvement in the fractured Balkan states.

It’s part war story featuring the work of the Special Operative Executive in Yugoslavia, part domestic thriller, and Elizabeth’s Graham’s cleverly constructed and beautifully written novel is an emotional journey with a complex heroine facing danger during the conflict and its subsequent psychological consequences. It is also a completely mesmerising and absorbing tale of manipulation, treachery and deception, the betrayal and sacrificing of the individual for the common good – or even for another’s ambition and advancement.

In post-war England a young woman finds herself in an asylum, charged with a violent crime she has no memory of committing. As she tries to make sense of her situation with the help of a sympathetic psychiatrist, a second – and completely different – side to her character emerges. This second self recalls parts of her childhood and her later harrowing experiences of special-operations work with Tito’s Partisans in wartime Yugoslavia.

But after that, the trail is lost in confusion. She knows there was a peacetime marriage before she was plunged into her living nightmare, but somehow she must draw the pieces of her dual life together to regain the vital memories that will uncover the truth of whether she is really a violent criminal – or a woman manipulated and betrayed.

The character of Maud/Amber is strong and the book explores the themes of love and loyalty in a well-thought out plot with a series of twists which keep it moving along at an exciting pace. A bittersweet and poignant story depicts the brutality of war and the inevitable betrayal it brings, but also highlights the capacity of human love to transcend differences in what could otherwise have been just another Balkan tragedy.

The major female characters have a real depth – more than can be said for many of the either brutal or self-advancing men – which give it a ring of reality although it is entirely fictional with only the various enduring factions of Balkan religious and tribal hatred accurately portrayed.

In a sometimes a difficult, but enthralling, read Graham offers much sadness, but also lots of strength and uplifting moments in a tale which stretches from the final days of the war to the present – and an ending which shows it is possible to be reconciled with the past.