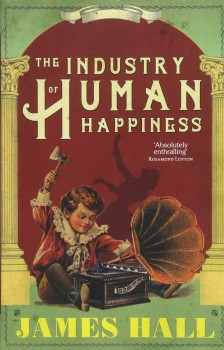 The Industry of Human Happiness

Max Cadenza’s dream of harnessing new technology to put the world’s greatest music onto gramophone records is threatened by a crooked theatrical impresario.

This debut, historical ‘faction’ with a decidedly noir crime twist and family tensions, set in the theatres and music halls of late Victorian London, is also a celebration of the magic of music.

In an age where records – and their digital successors – are a constant in our lives and sold by the billion, it is a reminder of the struggles and unconquerable spirit of the early recording pioneers who overcame all opposition and technical problems to launch what was literally a revolution in the ‘Industry of Human Happiness’.

James Hall, a freelance journalist and one of the Daily Telegraph’s music critics, has drawn on his long experience, latterly as the paper’s consumer affairs editor, to create a compelling and believable story, which encompasses the sights, smells and, above all, the sounds of 1890s London in what is an erudite rollercoaster.

It’s meticulously researched and written with a real passion for the subject, and the fast-moving plot captures the flavour of both the fledgling record industry and the revolutionary impact it would have on cultural life, as well as the seedy but exhilarating world of London’s West End.

Max Cadenza and his younger cousin Rusty nurture a dream of launching the gramophone industry from a Covent Garden basement. Max is a musical dreamer, his ambitions to make what he thinks are the world’s greatest sounds available to an international audience. The emotionally disturbed Rusty is the mechanical brains, adapting and perfecting existing technologies, to make this happen.

When they achieve a coup, recording an internationally famous Italian opera singer, they attract the enmity of the ruthless impresario who controls most of London’s theatres and music halls and who will go to any lengths to protect the flow of customers through his doors.

Murder follows and Max and Rusty must face ghosts from their joint past, the brutality of the impresario, the emergence of rival ‘talking machines’ and a bitterly contested inheritance. Woven into this exciting plot where everyone has everything to lose is a love story involving Max’s sweetheart, the ambitious East End girl Delilah Green, who is determined to make her mark as a headline singer. Egos inevitably clash as Max pursues his classical dream while Delilah tries to convince him that the future is the road towards ‘pop’ music.

This is a brilliant, often lyrical, read where you can smell and feel Victorian London as the protagonists follow their own desires to bring the sounds of the world to the masses. It’s also a brilliantly pacy, page-turning thriller which imparts the excitement and chaos of society at the turn of the century – and absolutely cries out for an ambitious producer to turn it into a TV series or movie.