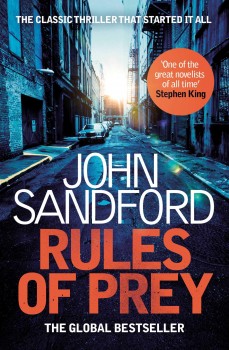 In his first appearance, Lieutenant Lucas Davenport faces an intelligent serial killer working by rules of behaviour which make it unlikely he will ever be caught.

This is a re-release of the first Lucas Davenport thriller originally published in 1989, the first of a series of about 30, and counting. In an introduction John Sandford explains how he came to write it, and refers to his long experience as a journalist which no doubt helped to keep it real. At the same times he freely confesses that Davenport was a construct designed to appeal, and that few real cops have (for example) Davenport’s interest in fashion.

What I find interesting is that for the Minneapolis-based Davenport, as for many other fictional detectives, the character emerges fully-formed from the first outing. Sandford puts this down to publishers requiring both characters and plots perfected before issue; whether all authors get such sage advice I doubt but it seems to have worked for him.

Rules of Prey was the first of a series which follow a common pattern. From the beginning the narrative is split between Davenport and his latest foe. On Davenport’s side we see him interacting with the politicians who oversee the police department, his fellow officers, and his personal friends: his latest squeeze, childhood friend Sister Mary, and so on. The variety of his friends and interests appeal; there is barely a pause in the action, and the conversation is sharp with plenty of repartee.

On the other side, we come to know a great deal about a criminal, normally an intelligent but warped person, who needs to be stopped. In this particular case, the culprit is a lawyer who calls himself maddog, a man with no friends whose ego creates for him a powerful persona bolstered by his attacks on women of a certain physical type. The portrait is absolutely convincing and makes his attacks both horrible and at the same time entirely compelling.

The book proceeds with alternate scenes from each side – maddog planning his next atrocity, monitoring the news reports of his last and taunting the police with copies of his ‘rules’ which he leaves on his victims, and Davenport managing the media, fending off political interference and devising innovative strategies to find maddog before he strikes again.

Sandford admits in his introduction that no real cop would ever be able to get away with the things that Davenport does, which is irrefutable, but I think never more so than in this first outing. In later stories Davenport can sometimes be found doing a bit of illegal entry, but rarely involved in wholesale perversion of the law to the extent he does in this episode.

The level of excitement is, however, common to the series as a whole. Let Sandford take you back to those ancient times before the cellphone and enjoy a book that despite the passing of time remains as fresh as it was the day it was written.