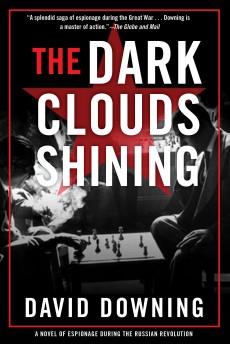 It’s 1921 and former secret service officer Jack McColl is approached by his former boss to undertake a mission to Russia. MI5, whose remit does not extend to Europe, is involved there and he needs to find out precisely what they are doing.

This is the fourth and final novel featuring former secret service spy Jack McColl. We encounter him in 1921 just as he is beginning a long prison sentence, imposed by a biased judge, for an assault on a police officer. The fact that the policeman had gratuitously insulted a former soldier who had lost much of face during the war by calling him a monster had counted for nothing in McColl's defence.

McColl, an embittered and disillusioned man, left the secret service not knowing what he was going to do, though his seven year prison sentence appears to have solved that problem. At least, he thinks it has, until one day he is visited by his former secret service boss Mansfield Cumming. He explains to McColl that MI5, whose remit extends no further that Britain and the empire, appears to be meddling in Russian affairs and to be involved in a plot to assassinate an important man. Since one of the MI5 groups in Moscow contains a man whom McColl has reason to hate, he willingly accepts Cumming's assignment, which involves finding out precisely what MI5 is up to and reporting back.

The book seems to fall naturally into three parts, the first and last being full of action and suspense that grip the reader. The middle section, however, which deals with a journey from Russia to India through the wilderness of central Asia, is altogether slower, perhaps deliberately so, and is largely concerned with discussion of the current situation in what used to be Russia and is now the Soviet Union.

We learn of the frequent executions of 'bandits', the chaos of the railway system and the deliberate starvation of peasants, whose food has been stolen. It is not that there is a shortage of food, but there is no reliable method of distributing it – something that seems to be beyond the wit of Lenin. The description of this journey goes on for rather too long, but the temptation to put the book aside should be resisted because not only is the ending dramatic (and surprising), it also contains an explanation of what has been left deliberately vague.

There is a further minor aspect of the book that is unsatisfactory and that is a tendency to refer back to events that occurred in the three previous novels. Both Brady and Caitlin Hanley play significant parts in the story and no doubt those readers familiar with the earlier novels will be glad to encounter both of them again and to discover what happened to them. So far, so good and they do not seem to be out of place in the story, but the frequent references to what part they played in other stories is a little wearisome.

The author manages, without losing the thread of the story, to place it realistically in time. There are references to, for example, Zhenotdel, Mensheviks and Antonovists – terms that are unlikely to be familiar. However, it is worth finding out what they mean because they provide the reader with a view of post-civil war Russia which is much more accurate than is implied by the simple word Bolshevism.

It is quite likely that at the end of this book the reader not familiar with the preceding three novels in the series may well be tempted to seek them out. If The Dark Clouds Shining is an example of the standard of the others that would be a rewarding experience.