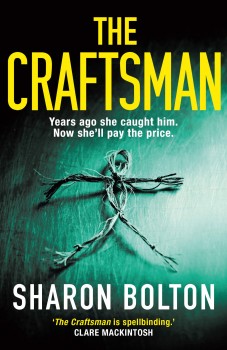 Florence Lovelady returns to the town that launched her police career, but soon starts to fear that her first murder case might not have been as cut and dried as everyone had thought.

1999. Florence Lovelady, now a senior officer in the Metropolitan police, has returned to Sabden, a small town in the shadow of Pendle Hill, the scene of the terrible case that launched her successful career. Local coffin maker and undertaker Larry Grassbrook was convicted of a series of horrific murders, burying alive children in caskets, alongside an already dead body. He was imprisoned for life and died there. Florence has come back to Sabden to see Larry’s body finally committed to the earth. She wants to know that it really is all over.

1969. As a rookie WPC, Florence is stationed in Sabden, a normally uneventful northern town, unless you count its reputation for witchcraft back in 1612 at the time of the infamous Lancashire witch trials. But shortly after she arrives, local teenager Patsy Wood goes missing, and she’s not the first. Two other teens, Susan Duxbury and Stephen Shorrock, are also missing. The rumour is that they’ve run away, as there were sightings of them near the railway station. Florence persuades her reluctant bosses to stage a reconstruction of the last time 14-year-old Patsy was seen alive. Calls flood in after it’s shown on TV, and Florence thinks they are close to a breakthrough, but when it comes, no one is prepared for the horror that unfolds.

Like Sharon Bolton, I grew up in the north of England, in the long shadow cast by the crime perpetrated by Ian Brady and Myra Hindley, then fear of the Yorkshire Ripper affected my freedom as a teenager. Back in the mid-1970s, you made sure to walk back from a night in town in pairs, and stranger danger was hard-wired in your consciousness from infancy, as the Lancashire moors came complete with their own bogeymen – only you knew that they really did exist. I remember reading Robert Neill’s Mist Over Pendle at school, which kick-started a fascination for the Pendle witches and I went on to devour classics like Harrison Ainsworth’s Lancashire Witches. Pendle Hill itself was a familiar sight, as many weekends were spent on Longridge, which faces it across the Ribble valley.

The Craftsman quickly establishes the dark, brooding presence of Pendle Hill at the start of the story, and although on her own admission, her Sabden bears more relation to the town of Darwen than it does to the real village from which it takes its name, that’s the sort of artistic licence that is easy to take in the spirit in which it is intended. The 1960s setting is well-invoked, with all the casual and generally unintentional sexism that went on in the workplace.

I absolutely adored the theme of witchcraft that ran through the book. I’m a huge fan of books that team the supernatural with police work, and devour anything by Phil Rickman, the absolute master of understated evil, and James Oswald, who can deftly add another level to police work. With The Craftsman, Bolton has put herself amongst some very good company. I liked Florence Lovelady a lot, empathising with her social awkwardness and the difficulties she faced as an outsider in a small town setting redolent with a rural suspicion of anyone ‘not from these parts’. There’s a strong sense of community in the book, but there are also suspicions of something darker, a closer grouping – maybe the Masons – who didn’t have the best of reputations in Lancashire in the 1960s and 1970s, or maybe something more sinister.

The Craftsman transported me back to the Lancashire I grew up in for the first 19 years of my life, and even the names helped ground the book in its time and place, with Duxbury and Shorrock common names in the area. Bolton perfectly captures the feeling of living with real fears and very real danger, and the feeling of trepidation that comes with not knowing when a killer will strike again.

Bolton’s depiction of the dark side of witchcraft, as well as its more benign face, is well-drawn and requires little suspension of disbelief. There’s a growing sense of horror as questions rear up in Florence’s mind as to whether the right man really was convicted 30 years ago. The closing stages of the book ramp up the tension to an almost unbearable level, and this was one of those books that kept me rivetted, turning the pages ever faster, as I put off things I needed to do and just settled down to keep reading. The ending was as chilling – and as unexpected – as I’d hoped, and was entirely in keeping with the final, uncomfortable truths.

The Craftsman is a triumphant mix of magic, superstition and policing, and I’d like to see Florence Lovelady return, hopefully as a member of the Police Pagan Association.