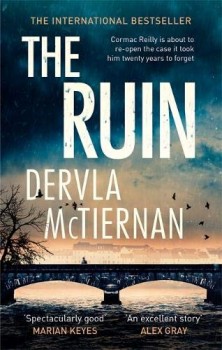 Jack Blake’s suicide rings increasingly loud alarm bells in Garda Cormac Reilly’s ears – ones he should have listened to long ago.

Aisling doesn’t want a baby. She is so far up the ladder to becoming a surgeon, any time off now and her certain future will sit on ice. Or worse. Her partner Jake is no more enthusiastic when she tells him. But she doesn’t expect the knock on the door a few hours later. Jack has committed suicide.
Cormac Reilly has come back after leaving his illustrious position in Dublin’s detective team. But the Galway Garda is not what he remembered. Politics and dynamics have changed. There has even been a behaviour-shift in the people he thought he knew well. For now, with a seeming down-step in his career, he is working cold cases.
A few days later, Aisling meets Jack’s sister Maude at the police station for the first time, the sister she had forgotten Jack had. Maude and Aisling question Jack’s suicide, but the disinterested police officer is offhand and dismissive. The two women begin making waves, and Cormac steps in. In doing so, he goes back 20 years to a tragic death he should have never walked away from.
The Ruin has all the signs of a solid new police procedural series. It’s written in a fairly omniscient point of view, but with heavy emphasis on following Cormac Reilly and Aisling, and the author beds the detective into his work surroundings while allowing the reader to see the investigation proceed from several angles.
The time lapse and delay between Jack’s suicide and Cormac’s insertion into the case make the pacing slow in the early chapters. This, combined with a lot of backstory, had me wondering when we were going to arrive at the heart of the story. And rather than raising the tension, it made it extremely clear where the plot was heading.
That said, by the end of the book, I had a clear picture of Cormac and several other characters. And hoorah, although he is carrying baggage, Cormac is not a stereotype alcoholic/single/disillusioned cop. Hopefully, as this series develops, the backstory will become superfluous as the reader will know Cormac and the team.
There is excellent attention to time and place, providing an intimate sense of Galway. And the author is not scared to throw dark and disturbing into the equation with the outmoded 20th century treatment and attitude to unwed mothers, along with child abuse, neglect, paedophilia and abortion.
The dialogue is convincing, even if the voices are slightly generic. There is a reasonable balance of conversation, action and introspection. And the pacing does improve. The office politics are loose-ended, in places confusing, and not sufficiently exciting. I presume these will continue into the next book as a subplot. However, it is more page-filling than fascinating and doesn’t add to the story.
Overall, this is a rounded, involved and engaging story. With more attention to pacing and a little less backstory, The Ruin would have ticked every box. This is an excellent debut and Cormac Reilly is a convincing and well-rounded detective definitely worth following.