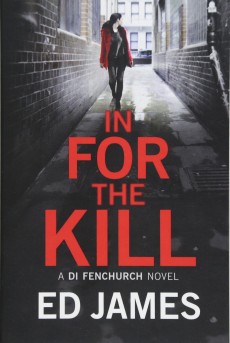 In For the Kill

The murder of a student at the University of Southwark may prove too close to home for DI Simon Fenchurch.

DI Simon Fenchurch’s home life should be peaceful. Chloe, his daughter, is back, and his wife Abi is due to give birth in a couple of months. But under the surface, his life is bleak, chaotic. Chloe, the victim of a long-term kidnapping and subjected to an operation to destroy her memory, has utterly rejected her parents. She does not even accept they are her real mum and dad. Fenchurch and Abi are drowning in conflicting emotions.
When Fenchurch and his team are called in to investigate the murder of a popular university student at the University of Southwark, they discover she was moonlighting as a camgirl, making money on explicit sites for a young but successful London criminal.
The university is a hotbed of drugs, secrets and shady characters. Yet no one is talking, leaving Fenchurch with a swathe of suspects but no solid evidence. And worse is to come. His homelife threatens to spill into his work-life. The murder site is Chloe’s university.
Both the author and the DI Fenchurch series, of which this is the fourth book, are new to me. I seem to have a habit of being late to the party. And this is not a cosy dinner-party, with memorable introductions and time to get to know the guests. This is one of those heaving affairs, where the vast sea of faces would have anyone but a true extrovert trembling in the doorway. There are so many characters in this story, particularly detectives, that at times it was difficult to place them.
Although this works as a standalone story, I am certain I would have appreciated the subplot of Fenchurch’s kidnapped daughter more if I had read his earlier books. That said, however much the author has aired this subplot in the first three of this series, the ultimate resolution to Fenchurch's family problems is far too easy.
Fenchurch, despite the Chloe subplot and interesting homelife, is way too familiar. He is yet another detective with colleague and boss issues. He is yet another cop who doesn’t get the principle of teamwork, who is angry and borderline out-of-control. his colleagues are less developed, perhaps due to the sheer volume. I also found his knee injury overdone. In the end, I didn’t feel sorry for him. I just wanted to shake him and tell him to get it sorted.

The suspects are certainly varied and, in some ways, unexpected. However, the ending is so hurried and convoluted that I closed the book unimpressed and dissatisfied. It smacked of indecision rather than a clever twist.
I am on the fence about James’ writing-style. Overall, it is good, though there is occasional doubling-up between dialogue and action. My problem is with the staccato aspect of many of his sentences and occasional word-choice. They left me nonplussed, they jarred and pulled me out of the story, though I acclimatised to them in the end and ploughed on.
There is an excellent sense of time and place. References to Trump and America, along with the hi-tech accessories, make it, for now, current. There is an interesting and reasonably fresh storyline with a few distinct characters. This is an easy but meat-on-the-bones read if you don’t leave it too long between sessions and forget who the players are.