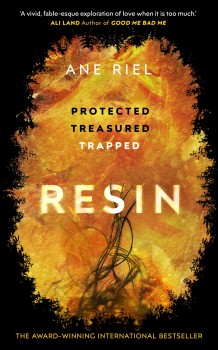 Liv lives on an isolated farm with her hoarder-carpenter father Jens, bed-ridden obese mother Maria, dead twin brother Carl and mummified baby sister. She’s happy but a bit worried, especially when she witnesses her dad killing her granny. Life goes on but a newcomer to the area wants to find out more about the strange family.

With the opening “The white room was completely dark when my dad killed my granny. I was there” you wouldn’t know where Resin could possibly take you. Keep reading and you will find yourself in a world where death is omnipresent in every imaginable shape, form and smell.
Six-year-old Liv’s life is both simple and complicated on a totally isolated farm surrounded by forests on a Danish island. She grows up in a strange dysfunctional family, in close connection with her dead twin brother Carl, showered with love by her carpenter father Jens and bed-ridden mother Maria. She feels safe in the knowledge that her parents would do anything for her, and she respects all God’s creatures.
Not that she believes in the bearded man. As a child of nature she makes herself invisible and silent when hunting at night with her father as in the dark the animals don’t feel pain. The girl also hunts for anything else that might be useful at home – food, clothes, tools, books or any interesting stuff with potential.
With an exceptional talent for squeezing into tiny places through small windows and passages Liv eventually turns into a Robin Hood and becomes the main provider for her parents. This happens for two reasons. Firstly, as Maria keeps growing bigger her obesity and illness prevent her from getting out of the bed hidden amongst the junk. Secondly, Jens, Horder by name, and a monumental hoarder by nature, feels a huge sense of duty to preserve things.
He struggles with own fears of everything that he has no control over: “The outside world became a threat, one which intruded on him and began to take over his life.” Hence, he feels the responsibility to murder his mother who has suggested that Liv needs to start school on the mainland. Soon afterwards he reports his daughter dead, lost in the sea, and creates a living space for her in a big rubbish container where she can stay out of sight of anyone who would venture that far into the forest. But a newcomer to the area is curious.
Ane Riel is going to be my new favourite writer thanks to her flawless skill of incredible storytelling, balancing tenderness with gruesome descriptions of existence descending into madness and the ever-present black deadpan humour. The story in Resin is told from different perspectives and evolves from a traditional understanding of love into the obsession to keep and preserve everything that’s important as Jens learns the hard way that whatever has left him will never come back. Riel gets inside the head of a disturbed man and understands his irrational need to collect, his joy and sense of connection with things, his obliviousness to dirt, disease and despair of scavenging.
Resin is mesmerising, seriously creepy and packed with unexpected twists and in Charlotte Barslund’s translation is an unforgettable original thriller. It mixes deep trauma with feelings of safety and security, the Brothers Grimm terror with the modern Scandinavian cool respect for privacy, and strong unbreakable bond between parents and child. Magic realism and the macabre ideas keeping the family together bring to mind Yrsa Sigurðardóttir’s supernatural themes.
Liv, Resin’s little heroine, seems self-sufficient and relatively stoical. She’s anchored by special items such as bow and arrows, books, hourglass, ancient insect trapped inside in a piece of amber, and her mummified baby sister, but manages to find a path for herself within unreal freedom and her parents’ insanity. She is Astrid Lindgren’s Pippi Longstocking for the modern times.