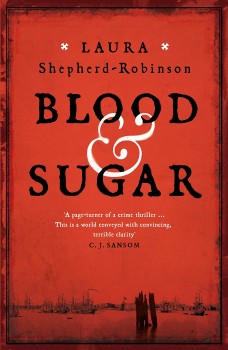 A body hanging on a hook at Deptford Dock, horribly tortured and branded with a slaver’s mark, propels American war hero Captain Harry Corsham into a dark secret at the very core of British society.

If this totally immersive, bold and breathtaking historical debut thriller that shines a searching light on one of the darkest period in British history has a weakness at all, it is in the title that hardly does justice to its tense and gripping content!
June, 1781, and the naked, unidentified body of a man hangs on a hook at Deptford Dock – horribly tortured and branded with a slaver’s mark.

Captain Harry Corsham – a hero of the American war, about to embark on a promising parliamentary career – is visited by the sister of an old friend, a passionate anti-slavery campaigner. Her brother, who she says was about to expose a secret he believed would irreparably damage the British slave trade, is missing after claiming powerful people were trying to kill him.

Corsham picks up the threads of his friend’s investigation, but his inquiries threaten his political prospects, his family’s happiness, force a reckoning with his past and threaten to destroy him both socially and politically.

The further he probes in the crime and vice-ridden Thames dockside town of Deptford – where playwright, poet, translator and spy Christopher Marlowe, the foremost Elizabethan tragedian of his day, was killed in a tavern brawl in 1593 – the more those around him and his own life are put at risk.

Laura Shepherd-Robinson’s meticulous research bases her story on the Zong massacre in November 1781, when 133 African slaves were thrown overboard to drown by the crew of the British slave ship when they ran low on water. The syndicate owning the Zong claimed on insurance for their ‘loss.’ The insurers refused to pay, but resulting court cases held that in some circumstances, deliberate killing of slaves was legal and that insurers could be required to pay.

Reports of the massacre boosted the abolitionist movement with the Zong becoming a symbol of the horrors of the ‘Middle Passage’ to the Americas. This triangular trade – cheap goods and weapons to west Africa, slaves across the Atlantic and sugar from the West Indies – made enormous fortunes for syndicate members and led to widespread corruption in the civil service and parliament where the powerful slavery lobby held governments virtually to ransom.

But it is not just disturbing truths about the trade that make this story a near-noir epic. Shepherd-Robinson spares the reader no detail of the horrific conditions, savagery and brutality on board the ships, or the way slaves were treated in Britain and the positions of the few free Africans and their growing number of liberal white allies, many acting from religious belief, in trying to break the disgusting trade.

Reading this is like listening to a voice from the 18th century speaking out with a terrible clarity. The stink of Deptford – a major slaving port for almost 200 years where trade was everything and the making of money even more – drips from every page. Its colours, sounds and smells fly off the page and the depth of characters of its large cast, without exception, is extraordinary, from the idealism of the abolitionists to the greed of the slave-traders.

This is a phenomenal debut, rich in atmosphere and beautifully written, and marks Shepherd-Robinson as a major new talent.